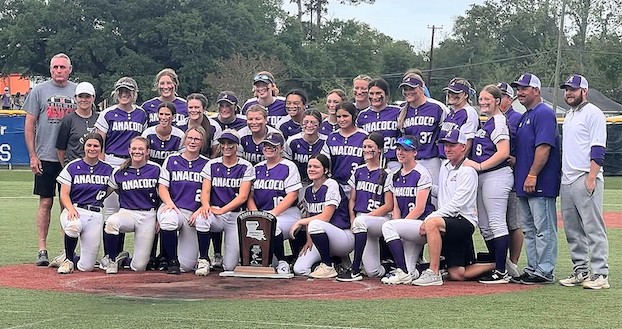 The Anacoco Lady Indians were the Class B state runners-up in softball for the second straight season, falling to Holden in the finals on Saturday at Frasch Park. (Special to the Leesville Leader)

SULPHUR — For the second straight year, the Anacoco Lady Indians found themselves in the Class B state championship game at Frasch Park in Sulphur.

And for the second straight year, they came up just a little short.

The top-ranked Holden Lady Rockets got a pair of homers from third baseman Gracie Duffy, while fellow juniors Kacey Breithaupt and Taylor Douglas also homered in claiming their fifth straight state title with a 10-4 victory over the seventh-seeded Lady Indians on Saturday.

Duffy was the unanimous choice for title game Most Valuable Players as she went 3-for-4 with two homers and four RBIs, along with a number of stellar defensive plays from third base.

But it was Anacoco that got things going.

Eighth grader Ava Davis opened the contest with a 13-pitch at-bat against Douglas. Having ran the count to 3-2, Davis fouled off a number of pitches before smoking a shot over the wall in centerfield to give Anacoco a 1-0 lead just moments into the contest.

Bailey Davis walked both Douglas and Alyson Fletcher, bringing Duffy to bat for the first time. On the third pitch she saw from Davis, Duffy smashed a 3-run blast over the left field fence and into the parking lot for a 3-1 Holden advantage.

The Lady Rockets weren’t done as Maddie McDonald doubled and scored on a passed ball for a 4-1 lead.

The score remained that way until the bottom of the third inning when Holden pushed three more runs across, two coming on a single by Douglas, allowing the Lady Rockets to open up a 7-1 lead.

But Anacoco wasn’t quite done.

Bailey Davis doubled to open the fourth inning and Abby Benevage, running for Davis, scored on a single from Emilee D’Amico, cutting the gap to five runs.

Anacoco’s rally continued in the sixth inning. Davis singled and courtesy runner Benevage advanced to third on a single by Jaiden Craft, who moved to second as the throw to third was not in time.

D’Amico followed up with a 2-run single, trimming the deficit to 7-4 heading into the bottom of the frame.

In the bottom of the sixth, Douglas, Duffy and Breithaupt all connected on solo home runs to extend the lead back to six runs, 10-4.

Anacoco threatened in the seventh, getting a pair of runners on, but Douglas induced a groundout from Davis to end the game.

Douglas gave up four runs on nine hits, while striking out nine in the win. She also drove in three runs as she was 2-for-3. Breithaupt also had a pair of hits and an RBI.

Indians pull away late in knocking off Florien, 16-3