800,000 longleaf pines to be planted in Kisatchie 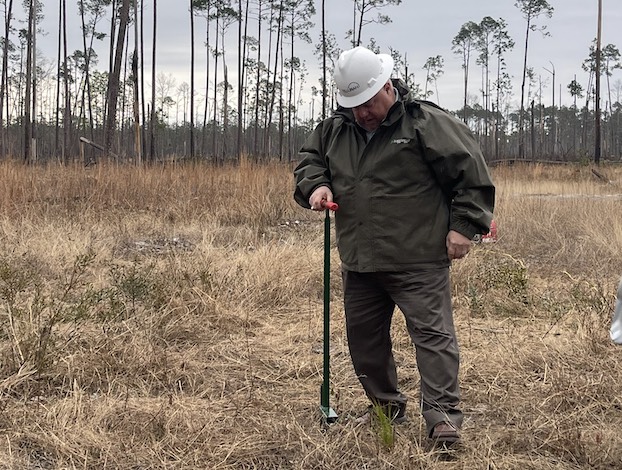 By Emily Burleigh
Seeds of progress and recovery are being planted at Kisatchie National Forest as part of a plan to grow more than 800,000 new longleaf pine trees in the forest through a $25 million partnership between the National Forest Foundation and Tellurian, a natural gas company housed in Texas.

This investment will be vital for recovery. Hurricane Laura flattened Kisatchie after its landfall, causing 256,000 acres of trees to fall. Overall, the Kisatchie covers 604,000 acres. An estimated $1.3 billion in lumber profits were brought to the ground.

Kisatchie is “the land of many, many uses,” he said. The forest provides outdoor recreation, hunting and fishing, camping and timber products. “All of that came to a standstill after Laura, and we’re still rebuilding from it … what we’re starting today… we will rebuild the National Forest.”

This event kicked off a five- year partnership between NFF and Tellurian that aims to plant more than 200 million trees across the United States. These seedlings will be planted throughout the 193 million acres included in the National Forest System.

“We are extremely honored to have been selected to be the forest that’s actually going to kick off this partnership nationally,” said Lisa Lewis, Kisatchie National Forest supervisor.

The original campaign was launched in 2018 by NFF to plant 50 million trees across national forests. Tellurian joined this campaign in 2021 with a $25 million investment to plant trees, increase seedling production and sequester carbon.

Since the launch of the campaign, 1 million trees have been planted in 10 forests and 500,000 tons of carbon has been sequestered. Nursery exemption efforts have been prioritized with the intention to produce an additional 1 million seedlings a year.

In 2023, 2 million trees will be planted across 4,000 acres will be planted nationwide as a result of the partnership between NFF and Tellurian. Additionally, $1.25 million will be invested in 7 tree nurseries to increase seedling and sprout production by about 5 million.

It is estimated that $180 million over 10 years will be needed for nationwide reforestation, according to Ken Arney, USDA Forest Service regional forester for the Southern region.

The process of restoring the national forests has many moving parts, such as assessments, seed collection and storage, seedling growth, seedling plants and seedling survival observation. “It’s not easy. It takes a lot of coordination,” Arney said. “We face unprecedented disturbances … and we simply can’t accomplish what we need to accomplish without the partnerships. Bottom line, healthy, resilient forests for today and tomorrow, and decades down the road, is what it’s all about.”

“It’s going to take all of us working together to make these public lands open and accessible and wonderful for all of us,” Mary Mitsos, NFF President and CEO, said.

NFF is one of the largest nonprofit partners that works with the USDA Forest Service, according to Mitsos. “We partner with individuals, foundations, local governments, corporations to rebuild and restore national forests, and hopefully build meaningful connections between communities and their public lands.”

She said decisive efforts are needed now to correct damages that have been made to forests nationwide. “With the increase in the size and severity of wildfires, more frequent hurricanes, insects and disease, our nation’s forests are heavily impacted all over the country,” she said.

For many, the corrective action of reforestation is personal. Dr. Mike Strain, the state Department of Agriculture and Forestry Commissioner, recounted his family’s connection to the lumber industry. “My family began harvesting trees, the natural trees that had been there since the beginning of time… but we did not understand about reforestation,” he said. “We continued to cut trees, harvesting cypress trees, harvesting the longleaf pine, until they were all gone.

This mission is vital to those at Tellurian, as well, said Charif Souki, Tellurian executive chairman. He said reforestation serves as an offset to the hydrocarbon industry, which generates co2 emissions. “We’ve embarked on a project to try to offset the carbon emissions that we are responsible for generating.

Like Strain, reforestation is personal to Souki. He was raised in the village of Cedars in Lebanon, where the cedar trees that were used to build the Temple of Solomon were grown. “The cedars are gone. There are only 300 of them left and we cannot continue to grow them, and this is what happens when you don’t manage the forest.”

Souki announced an additional $100 million of investment in state forests through their five-year partnership with NFF.