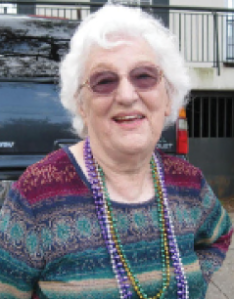 Memorial services for Isle Lang, 91, of Leesville, will be held at 2 p.m. on Saturday, Jan. 14, 2023 in the Labby Memorial Funeral Home of Leesville with Bro. Craig Forque officiating.
Visitation will be Saturday, Jan. 14, 2023, from 1 p.m. – until time of service in the funeral home.
Ilse Lang was born on April 26, 1931, in Brunsbuttel, Germany to her parents Alwin Meinert and Anne Marie Margareta Meinert. She passed away in Leesville on Thursday, Jan. 5, 2023, at Byrd Regional Hospital, with family at her bedside.
Ilse moved to Leesville in May 1962 when her husband First Sargent Grady Lang was transferred from Erlangen, Germany to Fort Polk, La. Before moving to Leesville, she was a typical army wife, having moved to various army posts both in the United States and Germany. Prior to moving to Leesville from Germany, Ilse became a naturalized U.S. Citizen on Dec. 10, 1957, while they were stationed at Fort Hood, in Killeen, Texas.
While in Leesville, Ilse was originally a stay at home mom. Later, Ilse first worked for the Army and Airforce Exchange Service as a clerk at the main Post Exchange (PX) at Fort Polk. She then worked as a bank teller at the Rapides Bank branch at Fort Polk. After that she worked at various branches of Merchants and Farmers Bank of Leesville, until her retirement.
Ilse attended the Trinity Lutheran Church of Leesville and later the First Baptist Church of Leesville. For many years, she was an active member of the Byrd Regional Hospital’s Senior Circle. She was also a member of the African Violets Club of Leesville. Her hobbies included the care and raising of house plants and flowers, having developed a green thumb late in life, and she enjoyed crocheting in her spare time.
However, her greatest joy in life was the raising of her four sons. During her sons high schools years she often served as a band mom, helping as a chaperon on out of town band trips. She was instrumental in ensuring that all four of her sons earned college degrees, some having also earned advanced degrees. All four of her sons have had successful careers in both business and government, none of which would have been possible without her guidance and encouragement.
Ilse is preceded in death by her parents, Alwin and Anne Marie Meinert; her husband, Grady Lang; and her son, Gary L. (Grady) Lang.
Left to cherish her memory are her sons, Thomas G. Lang and wife Cynthia Lang of Montgomery, Texas, Joe H. Lang of Leesville, Jerry M. Lang of Memphis, Tenn.; granddaughters, Rachel Parris and husband Paul Parris of Southaven, Miss., and Anna G. Lang of Germantown, Tenn.; and other family members, Elizabeth Lang of Germantown, Tenn., and Sheila Cronin of Highlands Ranch, Colo. Ilse will be greatly missed by all of her friends and family members.
The family would also like to express their appreciation to the staff of The Woodlands Healthcare Center for their assistance and care provided to Ilse. We would also like to thank the doctors, nurses and staff of Byrd Regional Hospital for the care that they provided to her in her final hours.
The family members are requesting that in lieu of flowers, donations should be made to either the Alzheimer’s Association or the Dementia Society of America.
Words of comfort may be expressed to the Lang Family at www.labbymemorial.com