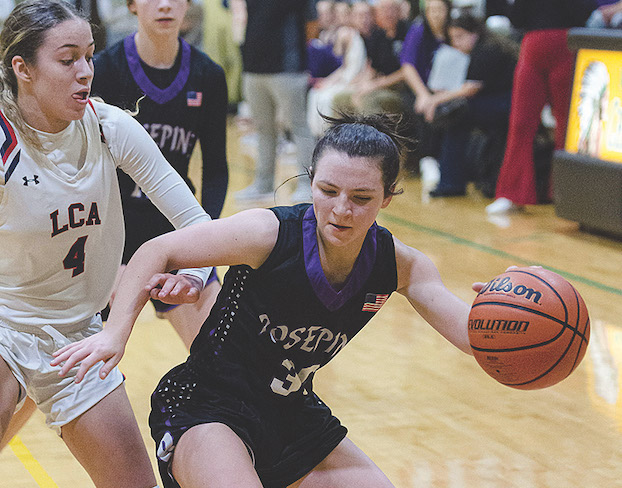 It was the fifth time in six games that the Bucs held an opponent under 22 points.

“Everything starts with our defense,” Barbe head coach Trey DeGiglia said. “We were really amped up on defense early, and that fed into our offense. When we are playing defense, sharing the ball and running, that is when we are at our best.”

Barbe held the Charging Indians scoreless for more than 41/2 minutes, forcing six turnovers in that span. Meanwhile, the Bucs built a 15-0 lead with six players scoring. Mia Colston opened the scoring with a four-point play after she was fouled on a 3-pointer. Colton finished with 10 points.

Mikaylah Manley scored 14 of her game-high 23 points in the second quarter as the Bucs went on a 23-1 run. Manley had seven rebounds, four steals and two assists, while Areil Williams had 14 points, six rebounds, four assists and six steals.

“The girls are buying in,” DeGiglia said. “They are trusting the coaches and playing together, and I am blessed to have great kids. They play hard and we are getting better every game. I am very proud of them.”

W-M got on the board with a pair of free throws from Alicia Powell with 3:24 left in the first quarter but never made consecutive buckets in the game.

Rosepine led early, but struggled to compete on the boards and saw its even-game win streak end at the hands of the No. 1 team in Division II select.

“They are just a heck of a club,” Rosepine coach Charles Kiely said of Lafayette Christian. “(Errol Rogers) does a great job coaching them, and they are very talented.

“They have a real good guard and bigs inside. It is kind of our weakness. We don’t have a lot of size.”

Addison Fruge’s 3-pointer 30 seconds into the game gave the Eagles a 3-2 lead, but Alexander scored her second bucket in the paint for the lead, and Jada Richard added a deep 3-pointer. Richard finished with 27 points, five rebounds, five steals and five assists.

All four of the Eagles’ losses have been to top-five teams, including Barbe, Hathaway and St. Louis Catholic.

“Those are games we want to play,” Kiely said. “I want to play people like that to get better.

“We have to get on the glass. We have to get down and guard somebody. We are kind of lacking a little bit on the defensive end. It is just simple things that we can fix, and playing good teams exposes those things.”

Rosepine had a 9-0 run in the fourth quarter after forcing four turnovers to cut LCA’s lead to 49-33.