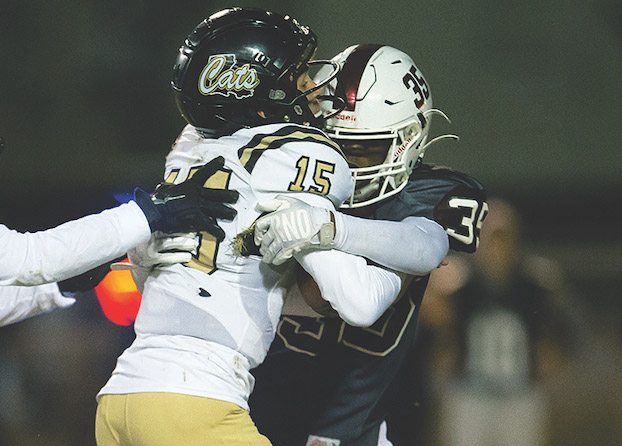 The ninth-seeded Leesville Wampus Cats used a stingy defense in taking a 21-7 victory over No. 25 Jennings Friday in the regional round of the Division II playoffs, ending Rusty Phelps’ 29-year coaching tenure with the Bulldogs.

Leesville (10-2) will host No. 1 Iowa next week in the quarterfinals. It was Leesville’s first quarterfinals appearance since 2018.

“I knew this was going be a battle tonight,” said Leesville head coach Robert Causey. “Hats and props to Jennings as they played hard. I knew it was going to be tough as our kids rose to the occasion under adverse conditions of what Jennings created on what they did defensively. Our kids made the plays they had to make.”

The Bulldogs took a 7-0 lead when Ziyhun Citizen returned a Xavier Ford fumble 18 yards for a score with 6:13 to play in the first quarter.

The Wampus Cats turned the ball over again on their next possession, this time on downs with 9:03 to play in the second quarter. But on the following possession, Ford scored on a 23-yard run to tie the score at 7-7 with 5:27 left in the quarter.

The teams exchanged turnovers when a Leesville pass was intercepted but the Wampus Cats stripped the ball way to regain possession.

Three plays later Leesville made a big play when Parker Maks threw a 35-yard touchdown pass to Izaiah Farley to take a 14-7 lead with 30 seconds left in the first half.

The Jennings threatened once in the second half, getting to the Leesville 17-yard line only to be stopped on fourth down with 10:02 left in the game.

Ford scored the final touchdown of the game on a 1-yard run with 1:42 to play to seal the Leesville victory.

Leesville was led by Ford with 178 yards on 33 carries and two touchdowns. Maks was 9-of-13 passing for 110 passing yards and finished with 39 rushing yards. Farley had three receptions for 65 yards.

“We played well and our kids executed the game plan,” Causey said. “Jennings came out and did a couple of things a little different and we had to adjust. Our kids made the adjustments, and we were able to execute.”

“We started off really well tonight but came up short,” Phelps said. “I’ve had a great run here and coached a bunch of great kids over this time period and I’m so honored to have been the head coach here at Jennings. I worked for a lot of great people, and this is how it ends.”

“Leesville played a great game, and we knew we had our work cut out for us tonight,” Phelps said. “Hats off to my seniors and our football team as we gave it everything we had tonight.”