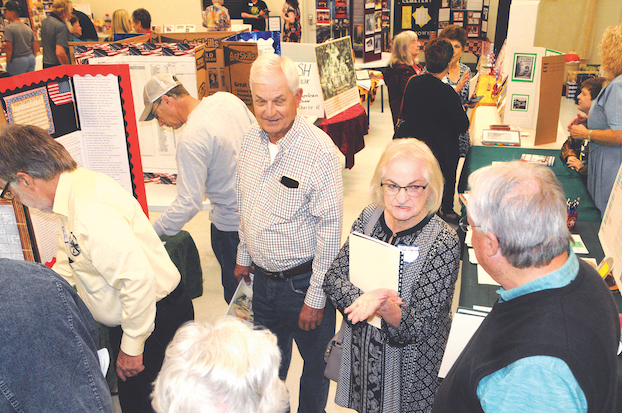 More than 80 years ago, as the United States prepared to join the Allied powers in the World War II battle against Germany and the Axis powers, Army leaders determined the need to develop tactics before heading to Europe for what promised to be a lengthy campaign against a well-trained foe.

To facilitate the training that required a rural environment and thousands of acres, those leaders looked to central Louisiana and its sandy, hilly, forested terrain.

However, it would require removing hundreds of families from those same lands and relocating them.

To honor those families, who often gave up all of their personal possessions for the good of the country, the Joint Readiness Training Center and Fort Polk hosted its 15th Annual Fall Heritage Reunion Oct. 29 at the installation’s Main Post Chapel.

“We are all proud to serve at an installation with such a rich history,” Gardner said. “An installation that for more than 80 years has been at the forefront of the Army’s premier training, readying our nation’s Soldiers to face our enemies.”

In January 1941 the Federal government exercised its authority to acquire land that would eventually pave the way for Camp Polk and Peason Ridge. In the process, more than 300 families were deeply impacted, defining their lives for generations.

“It is important to recognize that those sacrifices would lay the foundation of what would become the Army’s Joint Readiness Training Center and Fort Polk,” Gardner said. “We know that Fort Polk has been of vital importance to our Army and our nation during World War II, Korea, Vietnam, Panama, Operation Desert Storm, the Balkans, and most recently, in combat operations in Iraq and Afghanistan.”

The Joint Readiness Training Center provides relevant, realistic training — a crucible experience. The Army is able to provide this training — training that has save countless American lives — because of the available lands here.

“For that we are indebted to you, the Heritage Families,” Gardner said.

Gardner told those Family members in attendance that their roots – cemeteries, homestead foundations, favorite streams and groves – would always remain.

“They will never become shopping malls, man-made lakes or cul-de-sacs or townhouses,” Gardner said, drawing a round of applause. “Our annual Heritage Day and the Heritage Program will ensure we do not forget your sacrifices.”

Bill Nash, president of the Heritage Reunion, said none of those who attended the event could understand what their forefathers went through.

“Some of them had to be removed by force,” Nash said. “It was a difficult time, and I’m thankful Fort Polk has seen fit to honor those who gave up their homes and livelihoods.”

Marvin Self, 95, visited relatives during his summers growing up. He remembered the area as being destitute.

“All we had to eat was what we raised,” Self said. “There were no stores out here. You had to go all the way to Leesville to find a store.”

When the Civilian Conservation Corps set up a camp in the area, Self said residents were able to see movies for the first time.

“I think about those times and I’m thankful I’m still alive,” Self said. “Most of them have passed on and it’s important we remind our kids what it was like back then.”