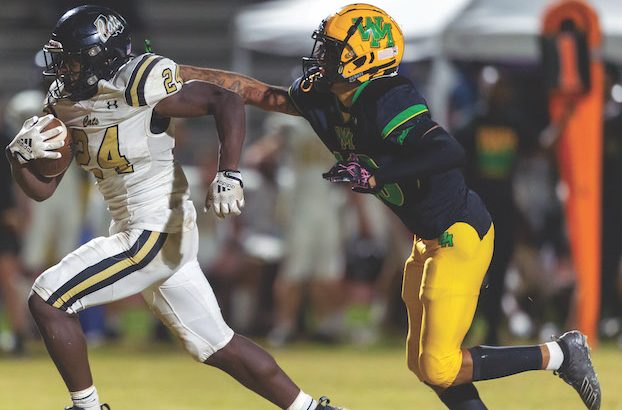 Sophomore Xavier Ford, left, extends the tradition of explosive running backs produced by Leesville High School. Ford is the leading rusher in Southwest Louisiana with 1,593 and 18 touchdowns on 223 carries for the Wampus Cats (6-1), who will visit LaGrange Friday night in a District 3-4A game. (Kirk Meche / Special to the Leesville Leader)

The Leesville Wampus Cats have had a strong tradition of stellar running backs from Eddie and Vincent Fuller and Oscar Joiner in the 1980s, Cecil Collins and Xavier Burrell in the ’90s, Michael Ford in the 2000s and more recently, Cory McCoy and the Gallashaw brothers, Dante and Caleb.

And the tradition continues this season with sophomore Xavier Ford, who has exploded onto the scene in his first year as a starter.

Through seven games, Ford has 1,593 yards and 18 touchdowns on 223 carries. Ford has no problem taking the ball in his hands, becoming the Wampus Cats’ workhorse at almost 32 carries a game.

Ford has picked up pointers from his uncle, former Wampus Cat and LSU standout Michael Ford.

“We usually work out the whole summer and call during the season,” Xavier Ford said about tips from uncle, who played in the NFL and the CFL. “He guides me through and tells me what is right and wrong, things that I can do during the game, and how I can improve.”

“My first game was very exciting,” he said. “I was a little nervous at first, but then I got the feel of the game and I started doing what I am supposed to do. I just started playing. After the game, it felt great knowing that I was able to do what I was coached to do.”

He is averaging 7.1 yards a carry behind a senior-laden offensive line. Leesville is averaging 29.3 points a game and has scored more than 40 in its last two games.

“I feel like it is a great offense,” Ford said. “We can throw the ball, we can run the ball and we can block up front. It is a really good offense for the whole team.

“(The offensive line) have been able to hold up their blocks and make great holes for me to run through. They pick me up when I am down. Sometimes I might have a busted play and I just have to work behind my line to get yards. It is an older offensive line, so they do what they are supposed to do.”

And he is not the only Ford on the team. Older brother Frank Ford Jr., a senior Sam-linebacker, leads the defense with 44 tackles.

Leesville head coach Robert Causey counts himself as blessed to be able to coach menbers of the Ford family.

“I have coached the whole family — the dad, two uncles and Xavier and his older brother Frank,” Causey said. “It is an honor. I have always said it was a blessing.

“God has blessed me with the opportunity to coach. Through the years of coaching, I have been here since 1999, it has been an honor to coach the kids in this community and coach family members, uncles, nephews and sons of players. To me it is special.