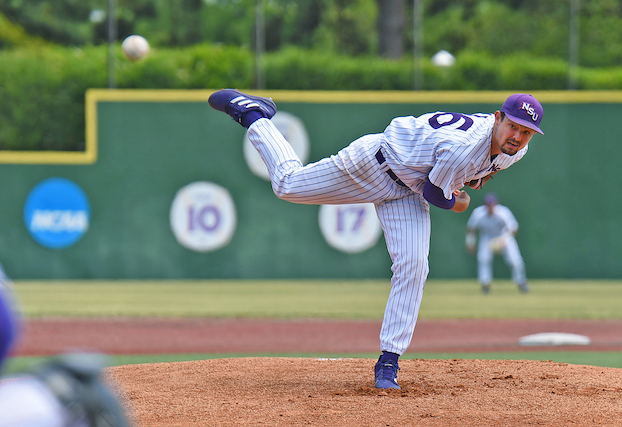 Northwestern State pitcher and former Leesville standout Johnathan Harmon was chosen on Tuesday in the Major League Baseball Draft by the Cincinnati Reds. He was chosen in the 13th round with the 393rd pick of the draft. (Chris Reich/NSU Sports Information)

NATCHITOCHES — It had been almost 15 years since a former Leesville baseball player was drafted into the major leagues.

On Tuesday afternoon, that streak came to an end as Northwestern State sophomore and former Wampus Cat standout Johnathan Harmon was selected in the 13th round by the Cincinnati Reds in the 2022 Major League Baseball Draft.

The last time a former Wampus Cat was drafted was back in 2008 when Justin Cryer was selected in the 29th round by the Blue Jays. Prior to that, the last Wampus Cat selected came in 1999 when current Leesville baseball coach Dustin Smith was chosen by the Chicago Cubs.

Harmon, the son of Chris and Krista Harmon of Hornbeck, is excited to get to work, which begins on Sunday as he departs for rookie ball in Arizona.

“This is an awesome experience,” Harmon said. “I don’t know really much about them, but I’m eager to get going and showcase my skills and my work ethic.”

Harmon is coming off a season where he was selected first-team all-Southland Conference for the Northwestern State Demons. For his 3-year career, Harmon was a two-time all-SLC pick and was a conference Pitcher of the Week winner for his complete-game victory over the University of New Orleans.

For his career,he won 12 games on the bump for NSU, working nearly 170 innings over three seasons, one of which was the Covid-19 shortened year in 2020.

But Harmon’s career began way before his days at Leesville. He patrolled the youth complex at Hornbeck before joining the Hornet varsity program as a seventh-grader, where he got a number of starts as some Hornets battled through injury problems.

As an eight-grader, he transferred to Leesville and the rest, as they say, is history. Harmon was a multiple-time selection on the all-district team and the all-Vernon Parish squad. Additionally, he was a two-time Class 4A all-state pick by the sportswriters.

During the shortened 2020 campaign, Harmon earned freshman All-American honors as he was ranked as the 19th best freshman in the country.

He has played for a number of coaches over the year and Harmon is extremely grateful for all of them, beginning with his first coach … his dad, Chris.

“There are so many coaches I would like to thank,and the first is my dad,” Harmon said. “He is the one who got me into baseball and made me fall in love with it and showed me the right way to go about playing. Coach (Dustin) Smith and Coach (Kyle) Walters at Leesville took a very small, skinny kid and they pushed me to get into the weight room. They taught me so much about mental toughness and they where both professionals ball players so they had an idea of what it took. It was great to learn under them.

“Of course, I need to thank every coach at NSU,” he added. “They took a chance on a kid from Leesville, where I had some success, but didn’t know how I was going pan out. But they believed in me for three years and they pushed me and guided me to the man and player I am today.”