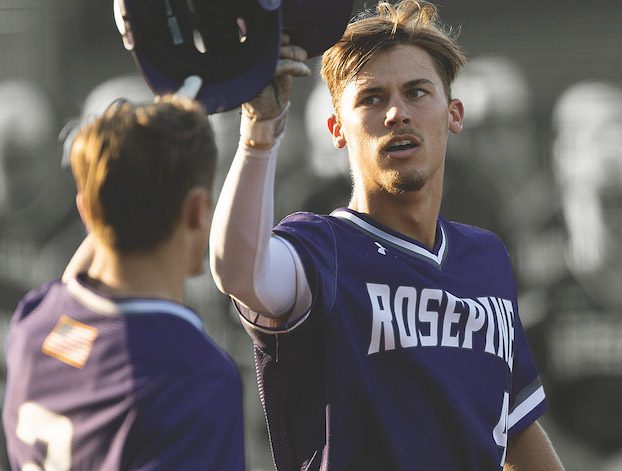 Rosepine shortstop Jake Smith, right, is spending time in the weight room when not playing in elite-level tournaments as he prepares to shoulder a leadership role next season when the Eagles pursue a state championship three-peat in Class 2A. (Kirk Meche / Special to the Leesville Leader)

Two months have passed since Jake Smith helped lead Rosepine to its second consecutive Class 2A baseball state championship, and he is already preparing for the 2023 season and the bigger role he will assume as the Eagles make another title run.

But Smith said he’s not feeling the pressure after the Eagles graduated seven seniors from the 2022 team, including Mr. Baseball Ethan Frey.

“I don’t feel much different,” Smith said. “We have a good team coming in. We are going to grind and compete. All we have to do is pitch and play defense.

“It is fun to be a part of a winning program. We are going to be pretty good. We have some good, young guys coming up. We have some arms.”

The Louisiana Tech commitment is playing for Team Louisiana 17U Ardoin this summer to hone his skill set. The team is playing in the Future Stars Series Class of 2023 National Championship this week. The tournament is being played at McMurry Park in Sulphur, McNeese State, plus Westlake and Sam Houston high schools. He is batting over .300 for Team Ardoin with 15 RBIs and 12 runs scored in 20 games.

“I am just trying to advance my speed,” Smith said. “I hadn’t been running well the last couple of summers, but it is starting to pickup.”

The shortstop worked on his presence at the plate during the 2022 prep season by adding power in the weight room. Smith batted .461 his junior season, up 40 points from his sophomore campaign, more than doubled his home run output to five and significantly increased his RBIs (43) and runs scored (63). He had 21 extra-base hits.

“My bat started showing up more,” Smith said. “I had a little more pop.

“It all ends up in the weight room, getting bigger and faster. You want to be the best, so you have to work for it. I felt pretty good. I got hot in the playoffs and we just rolled with it.”

He said he’s looking forward to playing in the World Wood Bat Association 2023 Grads National Championship next week in Georgia.

“That is going to be a fun trip,” Smith said. “It is better pitching, and it is always going to be better teams.

“(Hitting with a wood bat) is not much different. You do lose a little pop, but you know it is still there. Aluminum bats have a little thump behind it.”