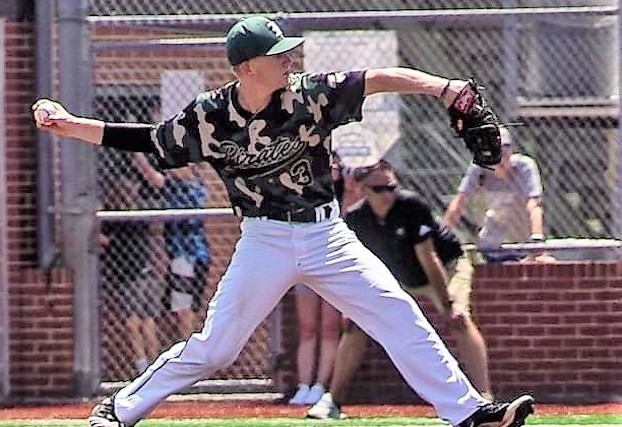 Hicks graduate Zach Haymon was chosen by the Louisiana Sports Writer’s Association as the Class C Most Valuable Player for the 2022 season. He went 7-4 on the mound this season with a 1.40 earned run average, while also batting .348 with 24 RBIs. He helped guide Hicks to a second consecutive Class C state championship and the 15th state crown in school history. (Photo courtesy of Shots by MC)

A total of eight teams reached the Class C semifinals in baseball and softball. Half of them were from Vernon Parish, with three of the four semifinalist baseball squads hailing from west central Louisiana.

Thanks to that performance, a total of 15 Vernon Parish athletes were named to the Class C all-state baseball and softball teams as chosen by a panel of the Louisiana Sports Writers Association.

The majority of the selections came on the baseball side of things as a total of six first-teamers were from Vernon Parish, with four more being chosen as honorable mention.

Hicks senior Zach Haymon took home top honors by being named the Class C Most Valuable Player. He finished the season with a 7-4 record, which included pitching 6.1 shutout innings in the state championship game, a 9-0 win by his Pirates over Hornbeck.

In all, Hicks landed five players on the team, including Haymon. Catcher Aiden Coffman and infielder/pitcher Brad Pelt were first-team all-state selections, while Hayden Doyle and Connor Helton reeled in honorable mention recognition.

Additionally, Hicks skipper Gary Williams was named the Coach of the Year as he guided the Pirates to a 26-8 record, claiming the school’s 15th state championship, the second-most in the state, trailing only Jesuit of New Orleans.

The Hornbeck duo of Parker Alexander and Jaren Mitcham were named to the team, with Alexander earning first-team honors with Mitcham reeling in honorable mention status.

On the girls’ side, Vernon Parish had three first-team all-state selections in Hicks eighth-grader Jayde Wilbanks, Hornbeck sophomore Abby Nicholas and Evans sophomore Sadie Jeane, who led the parish in home runs in 2022 with 13.