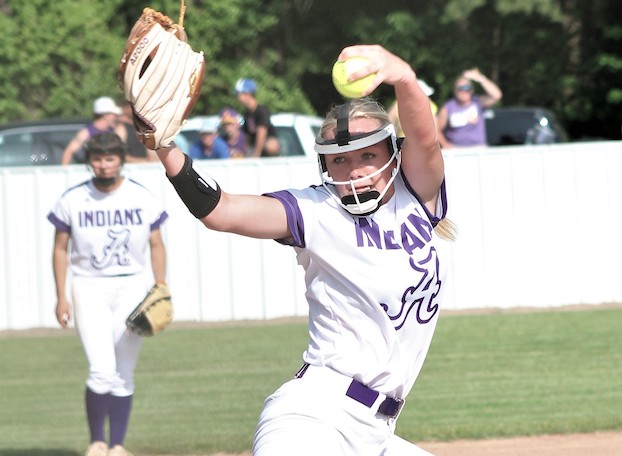 Anacoco’s Bailey Davis was once again named to the Class B all-state team by the Louisiana Sports Writers Association after leading the Lady Indians back to the Class B championship game. (Special to the Leesville Leader)

When it comes to Class B baseball and softball in Louisiana, the teams from both Anacoco and Pitkin proved they were the real deal.

Both Anacoco teams reached the state tournament, with the Lady Indians falling in the Class B finals, while the Indians fell in extra innings to the eventual champions in Choudrant. As for Pitkin, the Lady Tigers gave Monterey a run for its money in bowing out of the playoffs, while the Tigers reached the state quarterfinals, falling to No 1 Quitman in a nail-biter.

As a result of their success, a total of seven players from Anacoco and Pitkin were honored by the Louisiana Sports Writers Association with all-state recognition.

Rodriguez sported a record on the mound of 7-4 with a 2.64 earned run average, while also batting .305 with 17 RBIs. As a pitcher, he also recorded 84 strikeouts.

Bailey Davis batted .475 with eight homers and 40 RBIs, while also pitching, helping guide Anacoco to the Class B finals. LIttle sister, Ava, batted .438 with 20 doubles, 37 RBIs and 37 runs scored out of the leadoff spot.

Perkins was the ace of the Pitkin pitching staff as he had a 1.37 ERA with 64 strikeouts in 61 innings pitched.

The Class B Most Outstanding Players were Holden’s Taylor Douglas and Choudrant pitcher Landon Hennen.

Douglas repeated as the top player in Class B as she had 20 homers and 51 RBIs, along with a record of 25-8 with 194 strikeouts. Hennen was 8-1 for state baseball champion Choudrant, while also carrying a ..404 batting average.

Holden first-year coach Raven Andrews and Choudrant veteran Tony Antley, who retired after winning another championship, were honored as the Coaches of the Year.