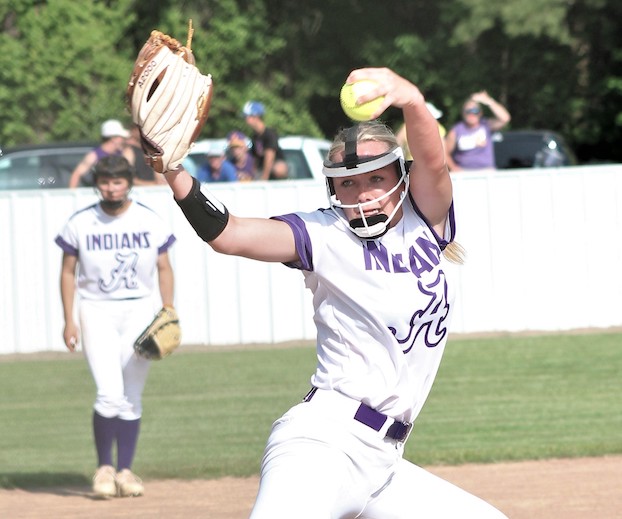 Anacoco sophomore Bailey Davis was named first-team all-district once again for the Lady Indians, who landed a total of eight players on the 5-B squad as voted on by the coaches. Davis was 7-0 in the circle in district play, while also batting .583. (Special to the Leesville Leader)

ANACOCO — For the second straight year, the Anacoco Lady Indians reached the Class B state championship game following a successful District 5-B campaign.

And now they will reap the rewards.

Five members of the Lady Indian softball squad were named first-team all-district by the coaches of 5-B.

The quintet of Bailey Davis, Ava Davis, Brooklyn Bryant, Tylar Summitt and Hanna Jackson were chosen first-team all-district, the most representation for any school on the squad.

Sophomore Bailey Davis batted .583 during league play and was 7-0 in the circle, while eighth-grade sister Ava batted .443 for the Lady Indians as the table setter.

Bryant batted .476 in league play, while Summitt and Jackson were good for averages of .300 and .367, respectively.

Pitkin landed a trio of players on first-team in Abby Robinson, Mya Odo and Shae Wetzel. Robinson batted .417 in district, while Odom had a mark of .407. Wetzel batted .300 in district play.

Cloud was joined on the team by teammates Ella Reeves, Andee Stanley and Malee Standley.

Singer’s Brandi Brady and the Elizabeth trio of Adri Johnson, Kale Cloud and Taylor Willis rounded out the first-team selections.