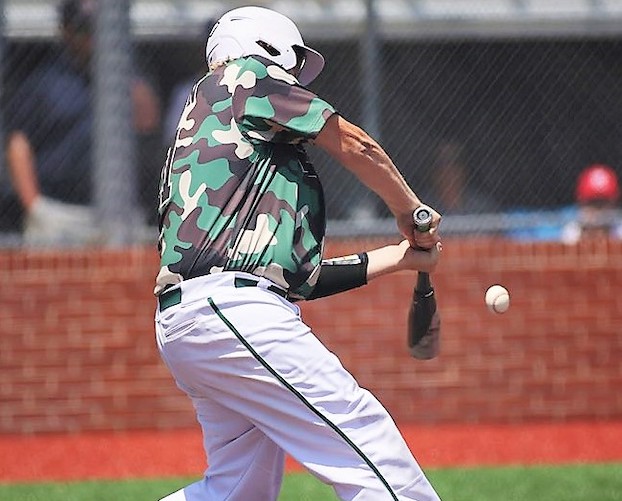 Rosepine senior Cole Donahue had a hit and two RBIs to help lead the Eagles to an 11-0 win over the Doyle Tigers in the Class 2A championship game last Friday in Sulphur. (Special to the Leesville Leader)

But sometimes a play or two makes a huge difference.

Instead of escaping the first inning with a double play ball, the Hornbeck Hornets watched Hicks score four runs, leading the third-ranked Pirates to a 9-0 victory over the No. 4 Hornets in the Class C state championship game at McMurry Park early Friday afternoon.

With the victory, the Pirates claimed their second straight Class C state title as they will embark to Class B next season.

“Going into the playoffs, were weren’t hitting well, but our pitching and defense was pretty good,” Hicks head coach Gary Williams said. “I told our guys if we could be patient and have some good at-bats, we could make a run. But I never thought we’d outscore our opponents, 57-2. I never dreamed of that.”

Hornbeck opened the game with a Jaren Mitcham double and he reached third, but was stranded  as Hicks starter Zach Haymon got out of the inning with a strikeout and a lineout.

It appeared as if the Pirates were going to go scoreless in the bottom of the frame. After loading the bases with a double from title game Most Outstanding Player Aiden Coffman and a single by Haymon, along with Brad Pelt being hit by a pitch.

With Connor Helton at bat, it appeared as if he hit the ball to Hornbeck starter JoJo Weeks, who flipped the ball home for one out, with Mitcham firing to Tristen Welch at first for the double play.

However, the ball was ruled foul and Helton blasted the next pitch he saw to deep left center for a 3-run double and a 3-0 Hicks lead. Helton later scored on a single from Hayden Doyle, allowing Hicks to take a 4-0 advantage.

The Hornets managed to load the bases in the second inning, but a defensive play by Dakota Edwards off a Mitcham grounder ended the threat.

Hicks pushed three runs across in the bottom of the second as Pelt had an RBI-single, as did Edwards. Helton also drove in a run with a hit to push the lead to 7-0.

The Pirates added some insurance runs in the fourth and sixth innings to seal the deal.

Haymon worked six and a third innings, giving up no runs on five hits with nine strikeouts, while Pelt closed the game with back-to-back outs.

Coffman was 3-for-4 with three runs scored and a pair of doubles, while Helton had a triple, a single and three RBIs. Haymon also had three hits and an RBI.

“Zach pitched one of his best games this year and Aiden was on a roll right from the start,” Williams said. “Our kids wanted to win and you could see it all over their faces.”

Weeks suffered the loss, going the distance for Hornbeck, giving up nine runs on 11 hits. Cole Richardson had a pair of hits to lead the Hornets offensively.