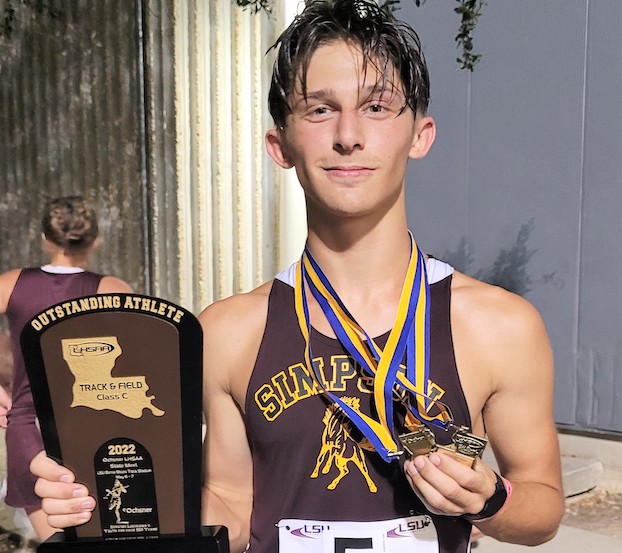 BATON ROUGE — If you happen to drive through Vernon Parish over the next few days, there may be a little bit more shine than usual.

Six of the nine parish schools won at least one gold medal in competition this past weekend, beginning with Class C on Thursday. In Class C alone, 12 of the championship golds were won.

Simpson sophomore Ean Allain reeled in three gold medals individually as he won Outstanding Male Performer at the Class C meet. He finished in first place in the 800, 1,699 and 3,200-meter runs, while claiming fourth in the 400 meters. His 34 points was far and away enough for him to claim top male honors.

Additionally, Cali Wedgeworth came away with individual gold by winning the discus.

Hicks standout Connor Harper brought home a pair of golds, winning both the high jump and the triple jump and nearly got a third by taking silver in the long jump.

Rounding out the gold medal wins on Thursday in the Class C meet was Evans’ eighth-grader Reese Jeane, who won the 3,200-meter run.

During the Class 2A championships on Friday, the Rosepine Lady Eagles set a state record in the 3,200-meter relay, becoming the first girls’ team to complete the race in under 10 minutes. The members of the relay team were Sophia Jeffers, Hayley Calcote, Lexa Thompson and Alicia Kitchens.

Anacoco man shoots girlfriend in hand while she slept