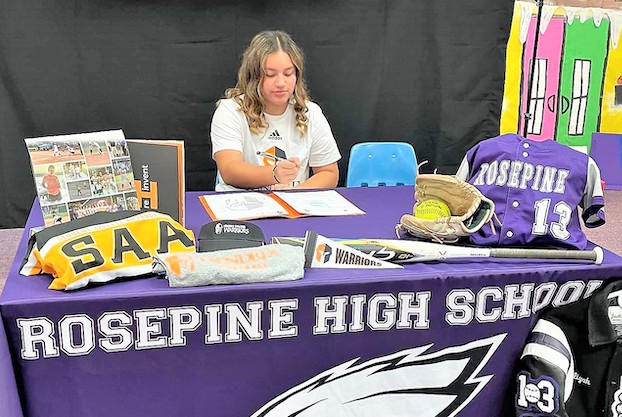 Rosepine senior first baseman Aaliyah Marrero signed her letter-of-intent earlier this season to continue her softball career and education with Hendrix College out of Conway, Arkansas. Known for their academics, Marrero aims to major in health science and nutrition. (Special to the Leesville Leader)

ROSEPINE — As a sophomore new to Rosepine High School, Aaliyah Marrero was admittedly a bit nervous when trying out for the Lady Eagle softball team.

But that nervousness soon turned into calm. Not only was she accepted by the players and coaches at Rosepine, she became an important player for the Lady Eagles over the past three years.

And as a result of her hard work and dedication, Marrero has signed a scholarship with Hendrix College out of Conway, Ark., to further her education as well as her softball career.

“She has such a passion for the game and truly puts her heart out there,” said her mother, Jacquelin Marrero. “We are beyond proud of her and blessed she has this opportunity to play and get her education.”

Not only has Aaliyah Marrero become an important part of the Lady Eagle softball team, she also became an academic leader in the school. She will graduate soon with a 4.1 grade-point average. She sports a 25 on her ACT, which should bode well for her at the academic rich school in Arkansas.

“Hendrix is known for their academic reputation,” Aaliyah Marrero said. “That was something I was looking for when I was choosing a school to attend. I also chose Hendrix because I felt a connection with the coaching staff and as soon as I stepped on campus, I knew it was my place.”

Marrero gained a reputation at Rosepine for playing multiple positions, basically anywhere they needed her to play. This year, as the lone senior, she was an anchor for the team at first base as all of the infielders were underclassmen.

Marrero helped guide the Lady Eagles through an early-season rough patch, which eventually went away as the team came together to register 16 wins in a row before bowing out of the Class 2A playoffs in the quarterfinals.

However, Marrero’s fondest memory was competing in Sulphur at the state tournament a season ago. It is memories like those which make her thankful she finished her playing career at Rosepine.

“Playing for Rosepine has been great and I love each of my coaches and teammates,” she said. “When I came to Rosepine as a sophomore, they really took me in and made me feel like part of the family. I am truly thankful God put my teammates and the Rosepine community in my life. I will always remember my time as a Lady Eagle.”

Marrero is the oldest daughter of Christian and Jacquelin Marrero.

Addison shines in leading Hornbeck back to state tournament