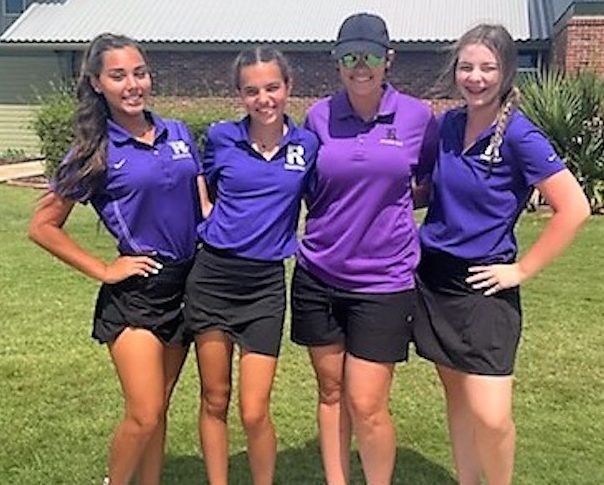 Rosepine head golf coach Lanie Johnson (second from right) poses with Zoey Teegardin, Saylor Johnson and Emily Walters at the LHSAA Division II State Golf Tournament prior to action. The Lady Eagles finished sixth in the team standings, the first time ever competing in the event. (Special to the Leesville Leader)

And although it didn’t quite turn out the way they wanted, the Lady Eagles came away, not only with an experience of a lifetime, but also the desire to return for another chance.

“I’m so proud of these girls and their hard work,” said coach Lanie Johnson. “We had our ups and downs, but we represented our school so well. They were amazing these past two days.”

The Lady Eagle team of Saylor Johnson, Emily Walters and Zoey Teegardin came away in sixth place at the state tournament. Rosepine’s 2-day cumulative score of 456 was the best among public schools competing in the event, which was won by Ursuline Academy.

Playing the Wetlands Golf Course, a par-72 course measuring 5,760 yards, Teegardin registered the top score of the tournament for the Lady Eagles, finishing with a total of 228. After shooting a 120 on the first day, she improved by 12 strokes on the second with a 108.

Johnson fired a team-best 115 on the first day of competition, but slipped to a 120 on the second, finishing with an overall score of 235.

Overall, Ursuline won first place, while Ouachita Christian and Newman were second and third. Episcopal of Baton Rouge was fourth, while St. Martin’s was fifth.