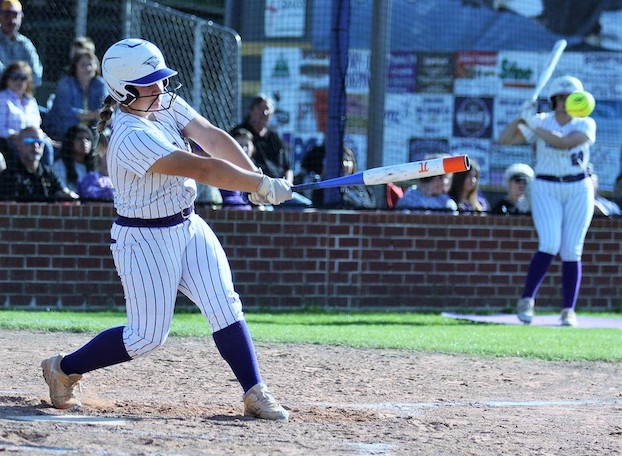 Rosepine’s Aaliyah Marrero, the only senior for the Lady Eagles, takes a cut at a pitch earlier in the season. The Hendrix College signee played her final game for the Lady Eagles on Saturday as they fell in the Class 2A quarterfinals to Doyle, 7-1. (Special to the Leesville Leader)

DOYLE — The fifth-ranked Rosepine Lady Eagles had won 16 games in a row and were coming off two impressive showings in the opening two rounds of the Class 2A playoffs.

But they ran into a buzzsaw on Saturday as fourth-seeded Doyle picked up a 7-1 victory in the state quarterfinals, bringing the Lady Eagles’ season to an end.

“Doyle is a well-coached team with a very good defense,” Rosepine head coach Glenn Granger said. “We hit the ball hard and they made some great plays.”

The Lady Eagles fell behind early on and couldn’t recover as Doyle scored two runs in the first inning and another in the third to move out to a 3-0 lead.

Doyle pushed three runs across in the bottom of the fifth to put the game on ice. However, the Lady Eagles continued to fight back, getting a run back in the sixth inning, only to see Doyle extend its lead to 7-1, which was the final.

Though he was disappointed with how the season ended, Granger was pleased with how his team came around, especially after losing both Chloe Bennett and Calyn Brister to the college ranks.

“I figured our defense would carry us no matter who our pitcher was,” Granger said. “We started the year using a seventh-grader and a freshman as pitchers until Sienna Stinley got eligible. I’m proud of our girls and I’m ready for next year.”

Bella Collins earned the win pitching for Doyle, striking out two batters, giving up one run on six hits. She also had a double and two RBIs, while Addison Contorno was 3-for-4 with a homer and three RBIs. K.K. Savant chipped in with a pair of hits.

Stinley gave up seven runs on 11 hits for Rosepine, suffering her first loss of the season. Ashlyn Hall and Shelby Deason each had two hits in the loss, with Hall driving in the lone Lady Eagle run.