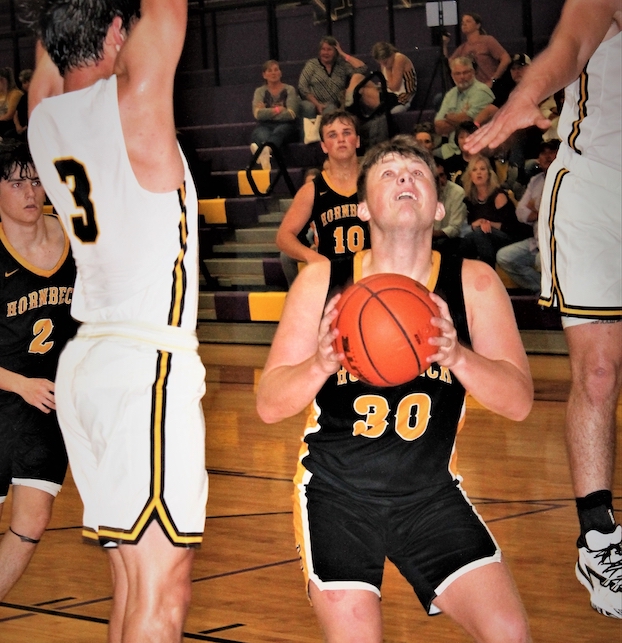 Hornbeck junior Brady Alexander (30) fakes the defender out with the ball in the post during the Hornets' win over Florien on Saturday. (Photo by Daniel Green)

Two schools just six or so miles apart traveled to Alexandria to compete in the TIPoff Classic on Saturday.

The Hornbeck Hornets had a trio of players reach double figures as they knocked off the Florien Blackcats at Alexandria Senior High, 69-53.

The game was a closely contested battle early on as Hornbeck led the Blackcats at the end of the first period, 16-15.

However, the Hornets were able to go on a big run during the second quarter, using a 23-11 surge to open up a 39-26 advantage at the intermission.

Florien managed to trim the gap to single digits going into the fourth quarter, but a 20-13 outburst by the Hornets over the final eight minutes sealed the deal.

Joseph Adams and W.C. Huckaby combined for 55 points to lead the Calvin Cougars to a 75-68 victory over the Fairview Panthers on Saturday at the TIPoff Classic.

The Panthers trailed by two at the end of the first quarter, but put together a 24-16 run to go into the locker room with a 40-34 lead.

Fairview held on to a 58-56 edge going into the fourth period, but Calvin closed on a 19-10 surge to claim victory.

Adams led all scorers with 33 points, while Huckaby contributed 22 points.