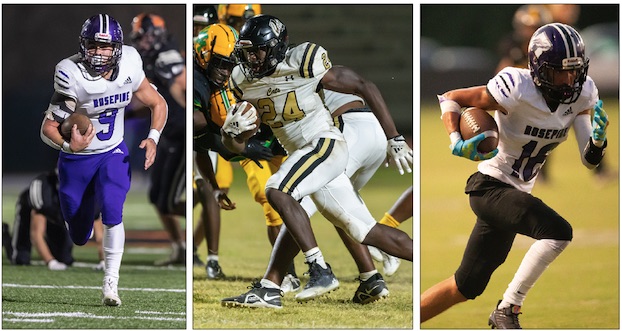 Running back Grant Ducote and athlete Aiden Cline made the Class 2A first team after leading the Rosepine Eagles to the Division III non-select quarterfinals. It was the second consecutive year the Eagles reached the quarterfinals.

Cline, the District 4-2A defensive MVP, stared at three position for the Eagles.  As a defensive back, Cline had 69 tackles, three tackles for a loss, six interceptions, two fumble recoveries and three defensive touchdowns. He was their top receiver with 30 catches for 725 yards and 12 touchdowns. On special teams, he made 47 of 58 extra-point kicks plus a 29-yard field goal.

Leesville running back Xavier Ford made the Class 4A team after a breakout sophomore season.

Ford, the nephew of former Leesville and LSU star running back Michael Ford, ran for 2,581 yards and 34 touchdowns on 361 carries in 12 games to lead the Wampus Cats to the Division II non-select quarterfinals.

He ran for more than 100 yards in all 12 games, had three 200-yard games and a pair of games over 370 yards. He scored three or more touchdowns in seven games.