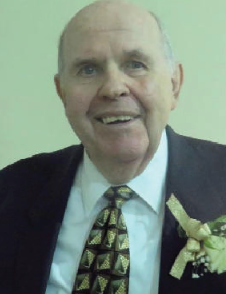 Funeral Services for Wallace Blake Palmer, 87, of Leesville, were held at 12 p.m.. on Wednesday, Dec. 28, 2022 at First Baptist Church of Leesville. Burial followed at Good Hope Cemetery in Anacoco.
Visitation was Tuesday, Dec. 27, 2022 from 5 p.m. – 8 p.m. at the church.
Wallace was born on July 16, 1935 to his parents Joseph and Hazel Hill Palmer in Hugo, Okla. He went to be with his Lord and Savior on Tuesday, Dec. 20, 2022 in Leesville, La.
He graduated from Oklahoma Baptist University in 1957 with a Bachelor’s Degree in Arts, and Southwestern Baptist Theological Seminary in 1961 with a Bachelor’s Degree in Divinity. Beginning in 1989, he made 25 mission trips to Brazil. He also took seven trips to the Holy Land, leading sixof them. He served on the Executive Board of the Louisiana Baptist Convention, the Board of Trustees for Southwestern Baptist Theological Seminary in Fort Worth, Texas, for 10 years, and was on the Board of Trustees for Byrd Regional Hospital. In his spare time, he enjoyed golf and spending time with family (especially his grandchildren).
Bro. Palmer was honored to serve as Pastor at Garvin Baptist Church in Garvin, Okla., from 1956-1961, Calvary Baptist Church in Trinity, Texas, from 1961-1963, Beall Chapel Baptist Church in Jacksonville, Texas, from 1963-1967, Northside Baptist Church in Lafayette, La., from 1967-1975, First Baptist Church in Leesville, La., from 1975-2001, and Good Hope Baptist Church in Anacoco, La., from 2005-until his retirement in 2017.
Wallace married Beverly Kay Tate on Aug. 30, 1963. They celebrated 59 years of marriage in 2022.
He is preceded in death by his parents; and his sister, Carolyn Bloodworth.
Left to cherish his memory are his beloved wife, Beverly of Leesville, La.; sons, Joseph Wayne Palmer and his wife Alba of Kenner, La., and Paul Blake Palmer and his wife Jessica of Katy, Texas; grandchildren, Taylor Marie Palmer, Logan Elizabeth Palmer, Haley Catalina Palmer, Andrea Christina Palmer, Kaylee Lynn Palmer, Kylie Nicole Palmer; great-grandchildren, Dante Alexander Lichau, Aiden Nicholas Lichau, and Mila Rose Serrano.
In lieu of flowers the family requests donations be made to The Alzheimer Association, First Baptist Church of Leesville, or Good Hope Baptist Church of Anacoco.
Our family would like to express our appreciation to each of you for your kindness shown in prayer, thoughts, and deeds. Your continued prayers are welcomed. A special thanks to the employees of Hospice of Leesville and The Woodlands Healthcare Center.
Words of comfort may be expressed to the Palmer Family at www.labbymemorial.com