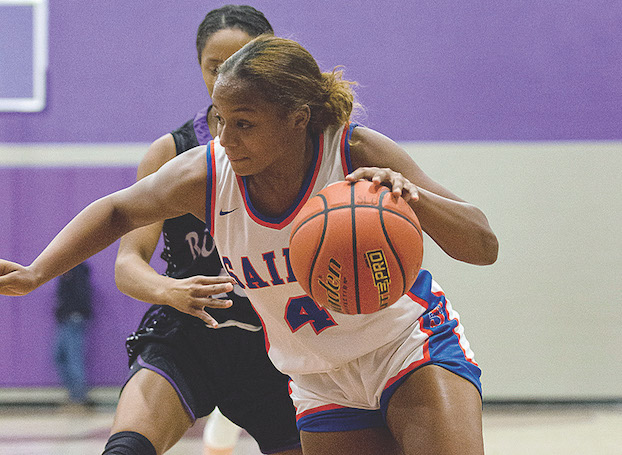 St. Louis Catholic weathered a second-half rally Thursday at the Hamilton Christian/Showdown in the Lake tournament to win an early season matchup of top-10 teams, 57-44 over Rosepine.

“Some of the young ones are starting to step up, and we are playing real aggressive on defense,” St. Louis head coach Tony Johnson said. “We have Paris Guillory, and she makes us go. She made us go again tonight.

“Good things come out of them when they start playing as a team. Paris let the other ones try to help her out this game, and it helped. We were able to beat a very good Rosepine team.”

Guillory, a senior, led the Saints (6-1), ranked No. 2 in Division II Select, with 29 points and eight rebounds but got into foul trouble in the third quarter with a 36-23 lead.

Rosepine, the No. 3 team in Division III non-select, nearly flipped the script, going on a 15-3 run, forcing six turnovers in that span. Kelly Norris hit a bucket 14 seconds into the fourth quarter to cut the Saints’ lead to 49-48. But the Eagles (5-2) struggled to finish plays against the Saints’ zone defense. Norris led Rosepine with 12 points.

“He had a good game plan of trying to keep us out of tempo,” Rosepine head coach Charles Kiely said of Johnson. “One big thing that we want to do is push the basketball. He got out of his press and came back, which is a great coaching move. They just played a little zone, and we struggled against it. We shot too many from the outside.

“Their length inside bothered us a little bit, and we just couldn’t finish.”

Sophomore Sunny Woodcock came off the bench to score eight points for the Saints, including a crucial 3-pointer with 7:05 left in the game for a 43-38 lead, allowing the Saints to pull away with an 18-3 run.

“We had to go with a few more guards and they stepped up to the plate and did what we had to do to win this game,” Johnson said. “I am so proud of all our kids. It is a big thing when you come from playing no minutes and just playing JV, then stepping up and playing varsity.”

Gabbie Link hit a pair of 3-pointers in the first quarter for the Saints and finished with 12 points.

St. Louis will play the Wossman-Barbe winner at 7 p.m. today, while Rosepine will face the loser at 5:30 p.m.