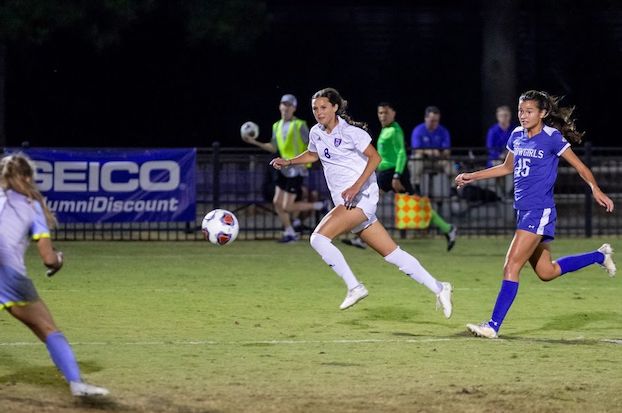 Northwestern State forward Gracie Armstrong has been named the Southland Conference Player of the Year. (Courtesy of Southern Conference)

Northwestern State forward Gracie Armstrong began the day finding out she was named Southland Conference Player of the Year.

She ended the day by proving why she deserved it.

Armstrong, a graduate student from Broomfield, Colo., showed everyone why she was named the conference player of the year with two goals and an assist. All the points came in a span of nine minutes early in the second half, leading NSU (12-3-3) to a triumphant 5-0 victory over McNeese (5-9-4) in the quarterfinals of the SLC Tournament on Wednesday evening at the Lady Demon Soccer Complex.

“Our goal is to come out the first 10 minutes of each half and put them away and we did just that,” Armstrong said.

The five goals are the most times NSU has found the back of the net in a conference tournament contest since scoring six in a 6-1 win against Nicholls in 2004.

After having a winning streak of six in each of the past four seasons, this win was the seventh in a row, the most since collecting nine in a row in 2000.

NSU scored four times in the second half, breaking open a 1-0 halftime score, turning it into a rout.

Armstrong had a hand in the first three, recording an assist followed by two goals.

Her assist came due to her creating the chance after forcing a turnover in the NSU offensive zone before feeding Olivia Draguicevich on a lead pass and she sent it past McNeese goalkeeper Jackie Kelly, who came out to challenge the shot.

The tally was Draguicevich’s 37th of her decorated career, expanding her career goals lead. The two points also tied Erin Hebert for the second-most points in program history, trailing Britiany Cargill by two for tops in program history.

Armstrong decided to join the goal-scoring club five minutes later, curving in a goal top shelf from the right side of the box, over Kelly’s outstretched arm.

Two minutes after that, she scored off a rebound to make it 4-0 in the 55th minute and end any hope of a comeback.

Caroline Hilliard attempted a shot from outside the top left-hand corner of the box, which was saved on a leaping stop from Kelly. The ball ricocheted off the crossbar and out to Armstrong, who put it into the open right side of the net.

“The confidence level of this offense is incredible right now,” Armstrong said. “I think it is awesome that multiple players are able to score. The players coming off the bench and finding the back of the net just shows the depth we have on this team.”

She then and watched her sister, Paige Armstrong, find the back of the net in the 72nd minute to put the finishing touches on the victory. Paige Armstrong tallied her first goal since Sept. 4 and third of the season on a header off a ball sent in by Kristina New Soto.

The assist is New Soto’s first career point, making it 18 players who have recorded at least one point this season for the Lady Demons.

“It feels amazing to score my first career point in the game,” New Soto said. “I am happy I could assist my friend Paige. I am so happy for the team. To do anything I can to help them feels good.”

As fast as NSU started the second half, it began the contest nearly as fast. Hallie Field tallied her fifth goal of the season on a header off a corner kick taken by Natalee Henry. Field went top shelf on the header in the ninth minute to give NSU the early lead.

“It was super important to get the early goal against McNeese,” NSU head soccer coach Stuart Gore said. “A goal like that gives you a little bit of confidence and forces the other team to play catch-up right away.”

NSU controlled much of the contest, as evidenced by the 14-3 differential in shots. It is the 13th time in the last 14 games that Northwestern State has held its opponent to five or fewer shots.

Chloe DeShazer stopped one shot to record her eighth shutout of the season, moving her into sole possession of third place on the single season shutouts list.

NSU next takes to the field on Friday evening against Texas A&M-Commerce at the Lady Demon Soccer Complex. The winner faces either Lamar or Houston Christian in the tournament title match.