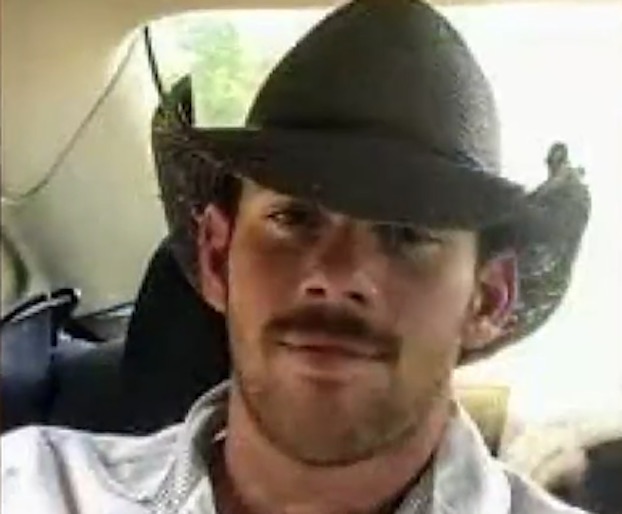 Bradley Stracener has been missing for two years. (Special to the Leesville Leader)

On a holiday recognized with candy and treats, one mother spent her Halloween releasing memorial balloons with her grandson in recognition of another year spent wondering what may have happened to her adult son.

On Oct. 31, Toni James penned a letter to the Vernon Parish detective leading the investigation into the disappearance of her son, Bradley Stracener, pleading for answers and clarification.

“If you have simply given up on Bradley’s case, please for the love of God just tell me…,” James wrote in her letter to the deputy.

James said she wrote the letter in an outburst of emotions and frustration after seeing another year pass without any new information about her son or what may have happened to him three years ago. Over time, she said she feels that her son’s case has been forgotten, and that detectives are communicating less and less about any new clues that may come in.

“So, if you have given up and this rests solely on my shoulders, please say so. I will take the wheel and you can get in the passenger seat because I need to make one thing clear; that young man who nobody has seen or heard from for 3 years is more than a name, a mug shot, a statistic or a number to me. Through all of his problems, triumphs, successes or failures, I have and will always be his mother. No matter what, I will find my child…,” James wrote.

James said she continues to relive the last moments she shared with her son before he disappeared.

“He woke me up with breakfast in bed. After about an hour of conversation, he was leaving and said ‘I love you, mom. I’ll see you after a while’. And then he walked out and drove away for the last time,” James stated.

Authorities have said that on the afternoon of Oct. 30, 2019, Stracener was visiting with friends in the Sandy Hill area before leaving to return a car to his girlfriend who was about 10 miles away.

But Stracener never made it to his destination.

The next day, Oct. 31, the car Stracener had been driving was found just a couple miles away, abandoned near leased hunting property by La. 10. Authorities said the car was found unlocked and with the keys in the passenger seat. There was no sign of Stracener.

Over the following years, detectives continued to search for information, but the case turned cold.

In 2020, Crimestoppers began offering a $2,500 reward for information on the case and each year searches were conducted in areas highlighted by law enforcement as “areas of interest”, but no new information was ever gained.

In 2021, authorities said they believed foul play may have been involved, but that there were no solid leads.

James said the endless cycle of hoping for answers and receiving none led her to living the life of a hermit.

Near the two year mark of Stracener’s disappearance, James connected with the Community United Effort (CUE) Center for Missing Persons. Founded in 1994, CUE advocates for missing children and adults by providing free search and support services and promoting awareness campaigns.

With this organization, James found a community who understood her pain and began volunteering with them, and eventually became a state director for Louisiana with CUE.

“CUE has restored my faith in humanity because they’re real. They’re genuine. They don’t sugarcoat things; they’re always there for you,” James stated.

In May of this year, CUE volunteers arrived in Vernon Parish to conduct a new search of the area where the car Stracener had been driving was found.

With teams bringing nearly a dozen specially-trained K9s, including cadaver dogs, the volunteers spent a weekend searching alongside Vernon Parish detectives, but the search came up empty.

James said she knows someone has information on what happened to her son, and that she refuses to give up her search.

“I’m not giving up. I’ll never give up,” James stated.

Anyone with information regarding Stracener’s disappearance is encouraged to contact VPSO at 337-238-1311.