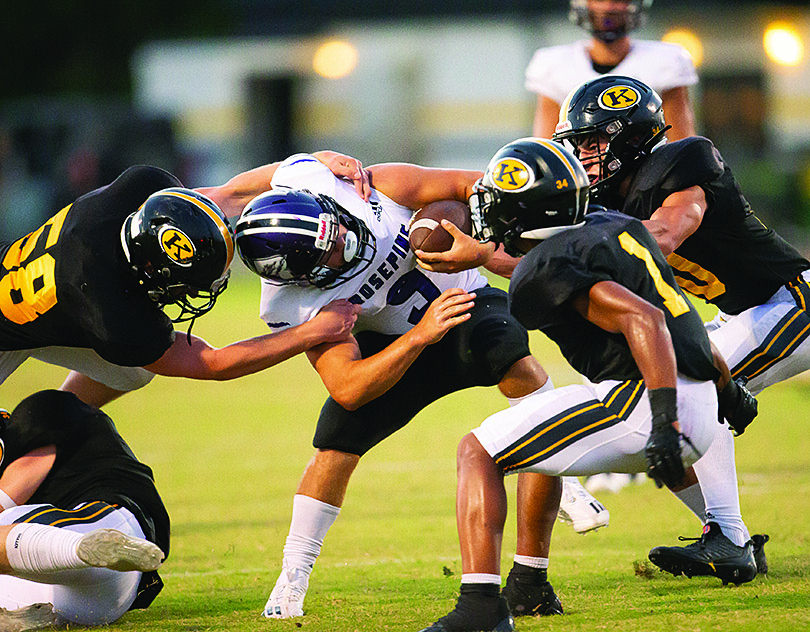 Jordan Pelican’s 4-yard touchdown run with 1:17 proved to be the winner as the Kinder Yellow Jackets took a 14-7 victory over former district rival Rosepine Friday night.

Pelican, who finished with 135 yards on 26 carries, led the winning drive that started with 6:48 to play before the final score. The Eagles’ last-ditch effort fell short as time expired.

“We were kind of in the same situation last week, but the difference was last week we were cramping up and this now we have a full game under our belt. That was the difference in the game,” said Kinder head coach Bret Fuselier.

“We were able to buckle it up and finish the drive with Jordan Pelican,” he said. “Last week he wasn’t on the field because he was cramping up, but this week he knew he had to go, and it was a big difference.

Scoring drives were minimal in the first half as Kinder (1-1) looked to score first. Kinder had a 6-minute drive that ended when Jake Smith intercepted a pass with 3:17 to play in the first quarter.

Rosepine took the next drive down the field as it was looking to score. The Eagles got to the 4-yard line for four attempts to score. Rosepine was stopped on fourth down, turning the ball over to the Yellow Jackets with 7:16 left in the second quarter, the crucial turning point in the game.

“It was a well-played game on both sides,” said Rosepine head coach Brad Ducote. “We should have got in the power set, but we didn’t right there inside the 4.

“Hats off to Kinder, they made the plays in the first half, and we didn’t. We had two wide-open touchdown passes that we didn’t connect on. I thought overall both teams played extremely hard on both sides of the ball. I couldn’t be prouder of my kids as we got better tonight.”

The Eagles committed a costly error late in the second quarter when a muffed punt gave the Yellow Jackets the ball on the Eagles 30-yard line with 44 seconds left in the half.

“We were fortunate to get some good field position off the bobbled snap on the punt,” Fuselier said. “Our guys were able to convert that as that is what good teams do. We didn’t let opportunity squander away, so our guys did that to the lead at halftime.”

Kinder called timeout with 15 seconds left to draw up a play to score before the half. A flea-flicker pass from James Roberts to Davian Matthews scored on a 3-yard touchdown pass with 9 seconds left. Kinder took a 6-0 lead at the halftime break.

The Eagles gained possession of the ball with 3:55 in the third quarter. The Eagles drove down field. The 15-play drive was capped by a Grant Ducote touchdown with 7:10 to play to give the Eagles their lone lead at 7-6.