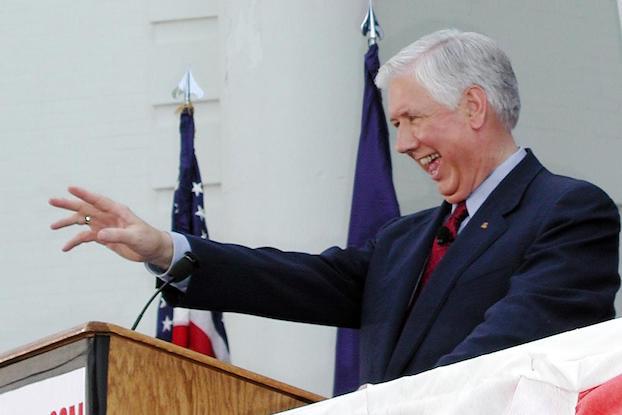 Former Louisiana Congressman Anthony Claude “Buddy” Leach Jr. announces his candidacy for governor on Aug. 10, 2002, in his hometown of Leesville. Leach, who spent one term in the U.S. House and ran the budget committee in the Louisiana House before leading the state Democratic Party, died Saturday. He was 88. (Associated Press Archives)

Leesville Mayor Rick Allen said he had many interactions with the former representative of the Vernon Parish area, and that he will always remember Leach’s love for his hometown.

“He often would call me just to ask how the city was doing. He always told me if I ever needed him, to never hesitate to call him and I know he genuinely meant it. Thankfully, I never had to make that call, but it was so nice to know that he was there and that he never forgot the place he came from,” Allen said.

Leach was born in Leesville on March 30, 1934 and attended public school in Vernon Parish. He graduated from LSU in 1951 and then served in the U.S. Army from 1956 to 1959. He returned home and earned his Juris Doctorate from LSU Law School in 1963 and returned to Leesville to practice law.

His humble beginnings, being raised in a low-income family by a hard-working single father in a rural parish, endeared him to voters and helped secure him three elections as a state representative beginning in 1968. In 1978, he was elected to the U.S. House, representing the Louisiana’s 4th District.

Though he would lose his reelection bid in 1980 to Buddy Roemer, Leach won one more Louisiana House election in 1983 and served as the chairman of the Ways and Means Committee.

His last public role was serving two years as the chairman of the Louisiana Democratic Party starting in 2010.

Outside of public office, Leach served his state well with his economic prowess. He also served on the board of the Leesville-based Merchants & Farmers Bank for 47 years, including 19 as chairman. During those years, the bank was able to expand out of Vernon Parish into the Lake Charles market and its assets grew from $20 million to $500 million.

State representative Mike Reese, who serves the Leesville area and currently sits on the same bank board, said that Leach has left a lasting memory in the area and community.

“Buddy had a passion for serving the community where he grew up. I believe that both in his time in public office and during his time with the bank, he focused on helping people in our state,” Reese stated.

In fact, many of the conversations Reese shared with Leach centered around solving individual problems that a citizen in the Leesville area was facing and that Leach had been made aware of.

“I always felt like Buddy’s small town roots together with the big business exposure he gained managing his family’s enterprise benefitted greatly the shareholders of our bank, the employees and the customers we served,” Reese stated.

Funeral services for Leach will be held at 11 a.m. today, Aug. 12, at the Episcopal Church of the Good Shepherd. His family has asked that in lieu of flowers, donations be made to the Leesville Lions Club, Habitat for Humanity, the Louisiana 4H Foundation, or Hospice of Baton Rouge.

Gov. John Bel Edwards has ordered all flags to be flown at half-staff on the day of the funeral.