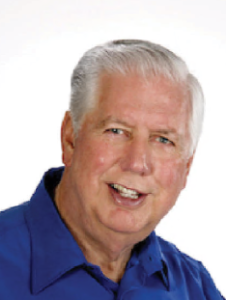 Former State Representative and United States Congressman, Anthony Claude “Buddy” Leach Jr. passed from this world on Saturday, Aug. 6, 2022, in Baton Rouge. He is survived by his beautiful wife of 55 years, Laura Alexander Leach; his three children, Mary Leach Werner, Lucy (Craig) Davenport, Claude (Jenny) Leach; his nine grandchildren, Hannah, Elizabeth, Patrick, Alex, Jackson, Jake, Grace, Miller and Chalkley; sister, Frances Watson and her husband Rob Watson of Montgomery, Texas; sister, Dr. Carolyn Huntoon of Barrington, R.I.; many nieces and nephews and beloved friends.
Buddy was born in Leesville, La. on March 30, 1934. He was educated in Vernon Parish public schools and graduated from Louisiana State University in 1951. He then served his country in the United States Army in Military Intelligence. After his military service, he came back home and earned his Juris Doctorate from Louisiana State University Law School in 1963. He then began practicing law in Leesville.
Buddy was elected to the Louisiana House of Representatives in 1967. He worked tirelessly for 10 years serving as the chairman of the powerful House Ways and Means Committee and had many honors and accolades bestowed upon him. Buddy was then elected to the United States House of Representatives for the Fourth Congressional District, serving from 1979-1981. After returning to his law practice in Leesville, he was re-elected to the Louisiana House of Representatives in 1983. Following his legislative career, he transitioned to the family business, serving as President of Sweet Lake Land & Oil Company in Lake Charles. Buddy served on the Board of Directors of Merchants & Farmers Bank in Leesville for over 40 years. He served as Chairman of the Board from 2002-2021. Always active in the Louisiana Democratic Party, he served as Chairman from 2010-2012.
Buddy lived his life in service to all, with the Leesville Lions Club and Masonic Lodge of Slagle, La., being two of the many service organizations that were very dear to his heart. Buddy loved the state and people of Louisiana and took great pride in his work in service to both. He believed in the power of education and that EVERYONE is worthy of a seat at the table.
Nothing was more important to him than his family and he was most proud of his nine grandchildren.
Buddy Leach was a friend to all, a mentor to many and always a gentleman.
In lieu of flowers, gifts can be made to The Leesville Lions Club, Habitat for Humanity, the Louisiana 4 H Foundation or Hospice of Baton Rouge. The family wishes to thank Charles Roberts, Angie Primeaux, Addie LeJeune, Eliza Brignac, and the staff of St. James Place for the loving care and dedication to Buddy and his family.
Funeral services will be at 11 a.m. Friday, Aug. 12, 2022 at the Episcopal Church of the Good Shepherd of Lake Charles. The Rev. Dr. Mark R. Holland will officiate. Interment will follow at Prien Memorial Park. Visitation Thursday will be from 4 p.m. until 7 p.m. in the Chapel of Johnson Funeral Home in Lake Charles.
Words of comfort to the family may be expressed at www.johnsonfuneralhome.net.