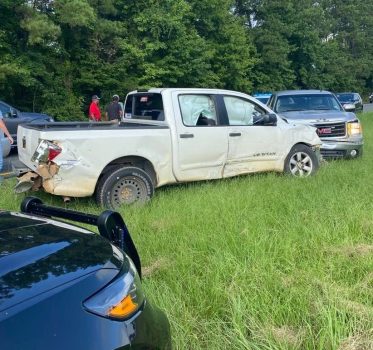 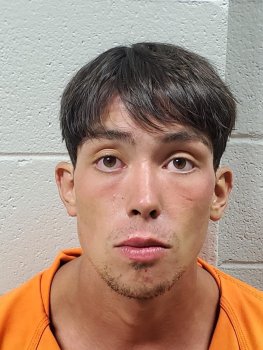 The suspect involved in an armed carjacking out of Sabine Parish was apprehended in Vernon Parish on Wednesday following a multi-agency pursuit that ended dramatically just outside of Leesville.

James A. Machado Jr., 24, of Meredith, New Hampshire, is facing a slew of charges that includes five counts of resisting an officer with force or violence after he rammed multiple police units attempting to stop him, and at one point reportedly laughed and waved at deputies while they attempted to pull him over.

The wild chase began about 6:30 Wednesday morning when Sabine Parish deputies attempted to make a traffic stop on the vehicle Machado was driving in Many. Machado refused to stop and began fleeing south through Florien, managing to avoid spike strips on at least two occasions.

Sheriff Sam Craft said Vernon deputies joined in the pursuit at approximately 8:30 as Machado entered Vernon Parish, and that they were joined by officers from the Anacoco Police Department, Louisiana State Police, and the Vernon Parish Narcotics Task Force.

As Machado made his way down Hwy. 171 through Hornbeck and Anacoco, Craft said the driver “aggressively attempted to ram police units” as he traveled south bound in north bound lanes.

Craft said Sabine deputies attempted pursuit intervention techniques (PIT) on the vehicle, but were unsuccessful. That was when, according to Craft, deputies observed Machado mocking them as he avoided their attempts.

The pursuit came to a dramatic conclusion as Machado crossed the Vernon Lake bridge. According to reports, a Sabine patrol deputy was attempting to get civilian drivers out of the lane of travel when Machado rammed the deputy’s unit twice, forcing the unit into the ditch where it became disabled.

Vernon deputies then performed successful PIT maneuvers and caused Machado’s vehicle to leave the roadway, but he was able to regain control and return to the highway where he began to ram those units.

In a final effort to prevent Machado from entering the city limits of Leesville, a female Vernon Parish narcotics agent struck Machado’s vehicle head-on with her patrol unit.

Both vehicles came to a rest in the traffic median and law enforcement from all agencies involved surrounded the vehicle and were forced to break the driver’s window to remove Machado from the vehicle.

Craft told the American Press that the female agent suffered only minor injuries and was cleared medically by Wednesday afternoon, and he praised her bravery in that moment.

“Her actions were the very definition of going above and beyond the call of duty,” Craft said. “When the call went out that we needed to end this pursuit then and there, she answered that call in the bravest way possible.”

Machado had no identification on his person at the time of his arrest and was uncooperative with authorities as they attempted to identify him, but Craft said detectives were ultimately able to positively identify him and confirm his identity with New Hampshire authorities.

In addition to charges related to the armed carjacking, he is charged with reckless operation, aggravated flight from an officer, five counts of resisting an officer with force or violence, failure to obey a red light, misrepresentation during booking, general speed law, driving on roadways laned for traffic, no driver’s license on person, careless operation, failure to use turn signals, traveling on roadway ditches, six counts of property damage, three counts of hit and run driving, possession of stolen things, and obstruction of public passages.

Machado remains in the Vernon Parish jail with detainers for the Many Police Department, Shreveport Police Department and the Sabine Parish Sheriff’s Office.
Craft said the investigation into the incident remains ongoing and that additional charges are possible.