Bo the Bloodhound has a heart as deep as his wrinkles 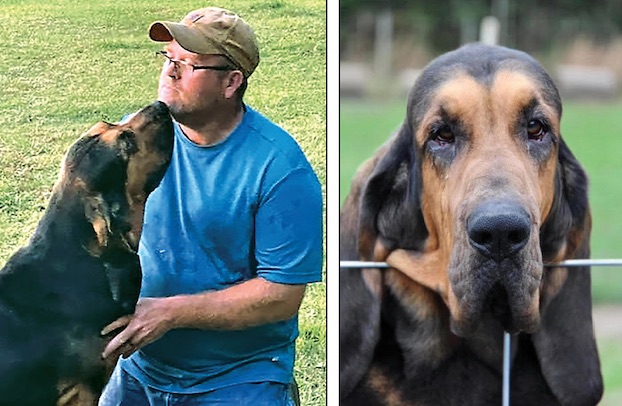 As police officers emerged from the thick woods of Oretta last week with a 76-year-old man who had been missing for five days in the extreme and muggy Louisiana heat, there was one name they all hailed as the hero of the day — Bo the Bloodhound.

Bo is a pet. A highly-trained and determined pet belonging to Rosepine resident Tony Arnold who said he wanted to fill a need that local law enforcement had in searching for lost individuals.

With a heart as deep as his wrinkles, Bo isn’t a biter and he doesn’t seek out criminals. He looks for those who are lost and unable to find their way home. It’s something that Arnold said was a mission close to his heart for years until one day he decided to act and put together a team of hounds that could help in those emergency situations.

“This all started because of my grandfather,” Arnold said.

Years ago, Tony and his wife, Becky, moved his grandfather — who suffered from dementia — into their home. What Tony said began well soon took a turn for the worst. The couple had to use doorbells, baby monitors and even took turns staying up all night in order to keep his grandfather from leaving the home at night.

On one night in particular, Tony said his grandfather left the home and walked a mile down the road before a passing motorist recognized him and stopped to pick him up and bring him home.

“He said he was going to church. That situation could have had a completely different outcome,” Arnold recalled.

Years later, after his grandfather’s passing, the Arnolds decided to build a line of tracking hounds that could help other families going through what they had. The couple traveled across states to find the best puppy prospects for their dreams and with the purchase of Bo and Daisy, T&R Hounds was born.

Tony set to work at training the dogs himself and reached out to Vernon Parish K9 officer Ricky Stephens for guidance.

“We just got to work. Ricky gave me tips and support and I really thank him so much for sharing his wisdom with me. We trained and continue to train at least four times a week in tracking people and scents, but Bo definitely has the heart for this and the skill to back it up,” Arnold said.

Arnold said children in the neighborhood have been helpful participants in Bo’s training by playing the ultimate game of hide-and-seek with the 100-pound scent detective.

“They’ve started saying it’s no fun anymore because he finds them so quickly now,” Arnold laughed.

Once Arnold became confident in Bo’s abilities, he reached out to the Beauregard Parish Sheriff’s Office to offer his assistance. Through an agreement, the agency began calling upon Arnold to see just what his bloodhounds could do.

In May 2021, Bo assisted in leading detectives in the right direction to locate two missing teens in the South Beauregard area, but it was a sweltering day this July when Bo earned his first “find.”

After Eddie Thompson had been missing for four days, his car was located bogged down on an old logging road. That following morning, Arnold arrived with Bo at his side. Four hours later, Bo located Thompson’s baseball cap and then the man himself laying under a tree in thick underbrush. He was seriously dehydrated, but he was alive.

“Without Bo’s nose, I’m really not sure how they would have found him in that spot. It was an amazing feeling of relief. Bo’s whole demeanor changed and you could tell he knew he had done good,” Arnold said.

All Bo had been able to use to guide his search that morning was the scent from the driver’s seat of Thompson’s car.

“When we walked out of the woods with Mr. Thompson, Major Det. Jerry Bell with the DeQuincy Police Department looked at me and said that was the best day of his job in 62 years, and that pretty much sums up our emotions. That made everything that we have been doing over these years worthwhile, right then and there,” he said.

Now, the Arnolds hope they can help others in the area and surrounding parishes with similar situations. They now have three available hounds, and another two in training, and he has begun reaching out to the community to educate families on how to prepare for a worst-case scenario involving their loved ones. They have begun promoting kits that can be purchased online that can store a loved one’s scent for several years, and can be used in the event that they go missing to help a search dog locate them quickly.

“We just want to help others who are going through what we went through with my grandfather. Drones and air support are great, but really nothing beats the old-fashioned nose of a scent hound, and if we can help even one family then it’s worthwhile for us. It’s already become worthwhile,” Arnold said.