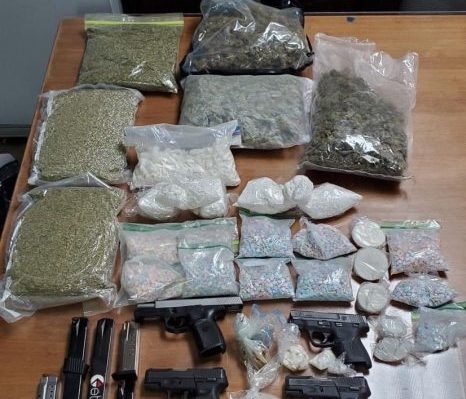 A recent narcotics raid by the Vernon Parish Narcotics Task Force led to the seizure of weapons and “significant quantities” of cocaine, methamphetamine, ecstasy, and synthetic marijuana, according to authorities.

Several firearms were also located inside the residence, and detectives reported three of the weapons were reported stolen.
Craft said the raid was the result of “an extensive, year long investigation” by the Narcotics Task Force.

“This was the product of community involvement and persistent police work involving surveillance and traffic stops,” Craft told the American Press.

While all individuals at the residence fled the scene on foot when narcotics agents arrived, Craft said one man was linked to the scene through DNA samples taken from some of the collected items.

On Monday, July 18, 30 year-old Bryan Daniel Kidd was arrested on multiple possession and distribution charges, as well as possession of stolen firearms and having firearms around controlled dangerous substances.

Craft said the investigation is ongoing and that more arrests are expected.