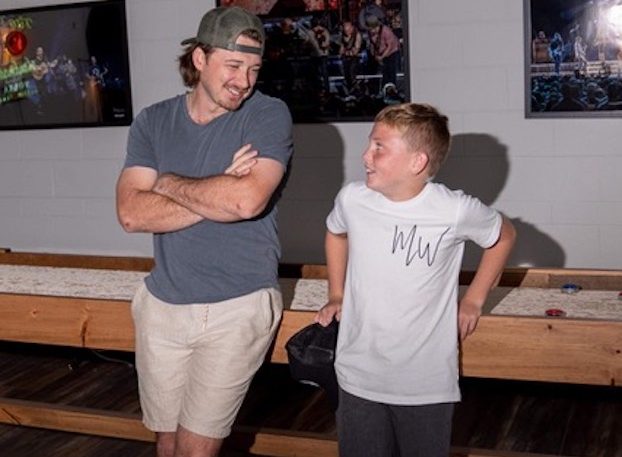 Country singer Morgan Wallen and 12-year-old Brevin Guidroz share a moment before Wallen's concert in Orange Beach, Ala., on July 2. (Special to the Leesville Leader)

A 12 year-old boy from Evans experienced what he called the greatest moment in his life recently when he got to privately meet his favorite singer, country superstar Morgan Wallen.

Brevin Guidroz considers himself a “superfan” of Wallen’s, but his adoration of the country crooner goes far deeper for him than being a fan of his music.

Over the past year, Guidroz has struggled with private and emotional demons in his life, but it was when Wallen experienced his own public struggles that Brevin’s mother said a true connection was made.

“Brevin has been going through a really tough time and last year was especially hard on him. Then, as he was going through his stuff, Morgan Wallen was ‘canceled’,” Andrea Guidroz said.

In 2021, Wallen was caught on camera using a racial slur. The singer was subsequently dropped by his management company, suspended by his label, and his songs were temporarily banned by radio stations. Wallen went on to release a public apology regarding the incident and four months later he was reinstated by his label. His career has since skyrocketed.

Guidroz said her son saw himself in Wallen’s fall and that he began to feel hopeful as she said he watched Wallen reconcile with the public. She said she could see how much her son was clinging to the star’s efforts and the difference it made in her son’s own efforts. In November, she set out on a mission to connect the two.

She wrote a letter to Wallen and with the help of local radio station manager, Jude Walker. The letter made it into the hands of Wallen when he stopped in Lafayette this spring for a performance at the Cajun Dome. The singer was so moved by his young fan’s story that he penned a personal response and sent Guidroz a package in the mail.

Guidroz said watching her son open the package and read the letter was an incredible moment, but it was what happened next that was truly amazing for the preteen.

A member of Wallen’s production team made contact with Guidroz and last week arranged for a private meeting of the two.

“Brevin had said that it was his dream to shake Morgan Wallen’s hand, and she made sure that happened for him,” Guidroz said.

Brevin arrived at the July 2 Orange Beach, Ala., show having no idea he was about to experience anything more than a concert until Seymour approached him and asked if he would like a backstage tour. As he was viewing memorabilia in a private room, the door opened and Wallen walked in and called to his fan by name.

Brevin described the moment as “overwhelming.”

“It was surreal. I felt like I was in a dream and asked for someone to pinch me,” he said.

The young fan spent several precious moments talking with his hero, and in the process his mother said he gained a boost of confidence that her son so badly needed having grown up without a father-figure in his life.

“I don’t think that this or anything can ever fill that void, but it was an incredible experience for him to see that he has people outside of his immediate family who are rooting for him and believe in him. To stand back and watch Brevin be in complete awe and starstruck was a joy like no other,” she said.