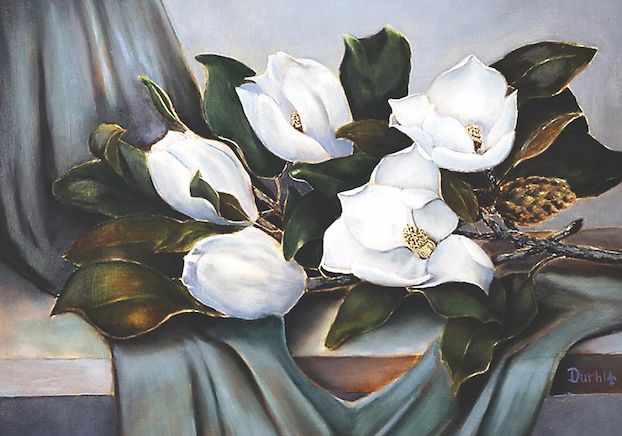 “Magnolias 4” is a painting by Durhl Davis using a method known as the Flemish Technique. A portrait Davis painted of his wife, Candice, recently recognized by Camelback Galleries, was painted using this same painstaking technique.

Anacoco artist Durhl Davis is receiving national praise for his intensely perfected oil painting works after being awarded the Bronze Award by Camelback Galleries in Arizona this spring.

Davis has dedicated years to perfecting his portrait art, but he says he is never truly finished learning how to improve his skill.

Davis uses a method known as the Flemish Technique. It utilizes classic art stylings of Dutch masters and is a method that is rarely used in modern works because it is considered so complex and time-consuming, but Davis said he finds the finished product to be so exquisite that is it worth the dedication.

Developed originally in Flanders, the technique begins with an artist using a white canvas and precise line drawing before applying the paint or varnish through multiple, transparent layers over and over again until the desired colors and shadows are achieved. The work is intricate and methodical, and Davis said he is motivated by both the challenge and the results of his labor.

“Hardly any artist chooses this method because it takes so much time, but the visual end results are much more luminous and glowing. I love the details and actual process it takes to make an oil painting. I am motivated by the overwhelming desire to make the very best, not the second best. There is a Bible verse my dad used to tell me that motivates me; Ecclesiastes 9:10, ‘what your hands find to do, do it with all your might’,” Davis said.

Davis continues to perfect his work out of his Fine Lines Art Studio in Anacoco — the place where his grandfather served as a state trooper until his retirement in the 1970s and his father served as pastor of Anacoco First Baptist Church until his passing in 2019.

The area was the first inspiration for Davis when he began drawing as a child. As he developed his skill he turned to painting portraits, where he found his true passion.

“Creating a truly captivating portrait is more than just drawing the appearance of the person sitting before you. For truly great artists, it is a way to portray the personality and heart of the individual being brought to life on canvas,” Davis said.

Indeed, the award-winning piece chosen by Camelback Galleries was a special piece to Davis. It is a portrait David made for his wife of three years, Candice, whom Davis described as the force behind his passion to pursue his love for painting.

The portrait is also placed in the Art Show International and is currently entered in the Swiss Art Expo in Switzerland.

Many of Davis’ pieces can also be found on display in the Real Art Gallery in downtown DeRidder. 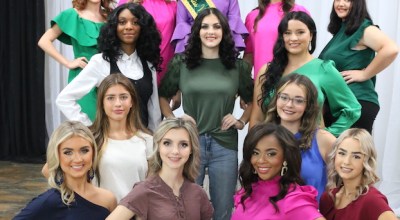