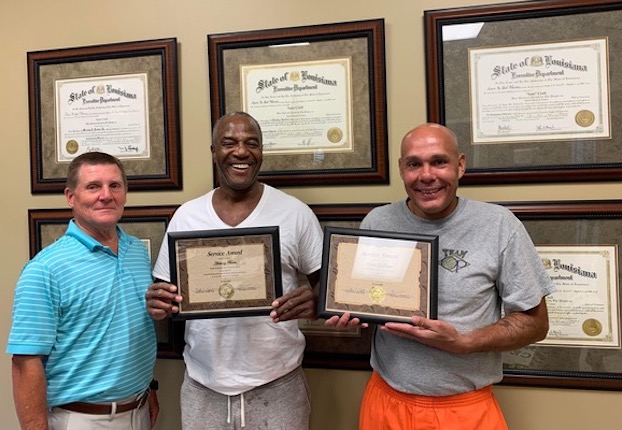 A Vernon Parish deputy is hoping to make a difference through a new outreach program that provides former inmates with the opportunity to atone for their mistakes and make a new path for themselves.

Narcotics Task Force Agent Benjamin Burwell approached Sheriff Sam Craft earlier this year with the idea to offer the program as a way to educate community members on the dangers and consequences surrounding the use of illegal narcotics. Craft supported the idea, and the People Helping People Outreach Program was created.

At each meeting, authorities offered a personal glimpse into the dangerous world of illegal narcotics from those who experienced it first-hand. Inmates from the Vernon Parish Jail were offered the chance to participate in the program on a voluntary basis, and Craft said many were pleased to take that opportunity.

One such individual is 54-year-old Anthony “A.B.” Burns, who not only spoke about the impact drugs made in his life, but also apologized to those attending the meeting for his past criminal activity. Burns not only used narcotics, but he sold them in his community.

Burns was joined by Ty Gomez, a 45-year-old man from Leesville who also made an emotional plea to the community in the hopes of helping others avoid the choices he felt led to make.

“Participation in the program is very cathartic for these inmates because it allows them to speak freely about their criminal behavior and the effects that it has had; not only on their lives, but their family’s lives and to the community as a whole,” Craft said.

Burwell said he was motivated to include inmates in the program because he believes many of them continue to carry a great sense of guilt and shame for their actions.

“There have been several inmates who have participated in the program, and this type of positive opportunity can make a huge difference in the future life choices of these inmates,” Burwell said.

Already, Burwell said he has received more requests for presentations from organizations throughout the parish.

“I am immensely proud of the People Helping People Outreach Program and the dedication of Agent Burwell and the inmates who participate in the program,” Craft said.

Craft also bestowed a Certificate of Service to the Citizens of Vernon Parish to Burns and Gomez for their support and participation of the program. While many other inmates have also participated, Craft said the two men have been the most consistent.