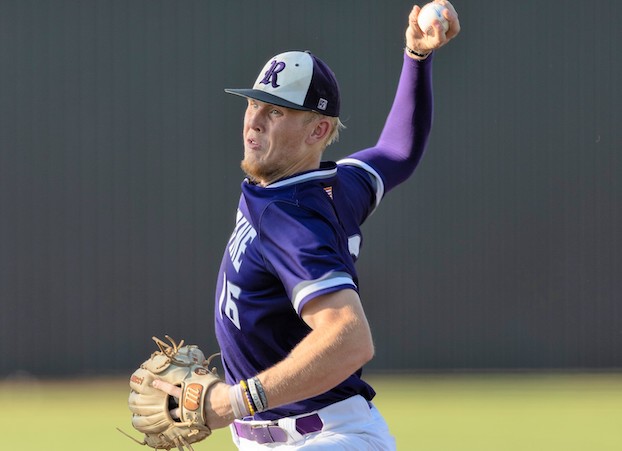 Rosepine graduate Ethan Frey, seen here pitching a shutout in the Eagles’ state championship win over Doyle, was named Mr. Baseball by a panel of the Louisiana Sports Writers Association recently. He went 5-0 as a pitcher, while also hitting almost .500 with 13 homers and 64 RBIs. (Photo courtesy of the American Press)

ROSEPINE —After winning the 2021 Class 2A state baseball title in dramatic style with a 1-0 championship game win over Doyle, Ethan Frey and his Rosepine teammates turned in a dominant run to this year’s crown, going 34-2.

For that, Frey is the winner of the Louisiana Farm Bureau Insurance/Mr. Baseball award, given annually to the state’s top player in all classifications as chosen by a panel of the Louisiana Sports Writers Association..

Frey said he knew the Eagles were having a special season when they began piling up district wins.

“Right when district hit, I knew it was going to be some of the tougher teams we were going to play all season and when we did what we did (going undefeated in District 5-2A play), I knew that we would have a shot to go back-to-back,” he said.

The Eagles did just that, closing the season with 30 straight wins, including two wins at the state tournament by a combined score of 25-0.

“Those were our best games, when we had to turn it up a notch,” Frey said. “We definitely did that and played great games when we knew it was going to be our last time playing together.”

Frey said he was able to improve every aspect of his game.

“I stepped up my game defensively this year,” he said. “As a hitter, I was able to hit for a better average and add more power, extra base hits and RBIs. As a pitcher I was more experienced and mature, learned what Coach Smith was thinking while calling pitches and how to make hitters uncomfortable.”

Frey has signed to play at LSU next season and said he will bring his same approach to Baton Rouge.

By winning Mr. Baseball, Frey became the first player in Vernon Parish history to accomplish that feat and is the second person in Rosepine history to win an overall LSWA honor, joining Christina Hamilton, who won Miss Softball.

Vernon Parish teacher named finalist for Teacher of the…