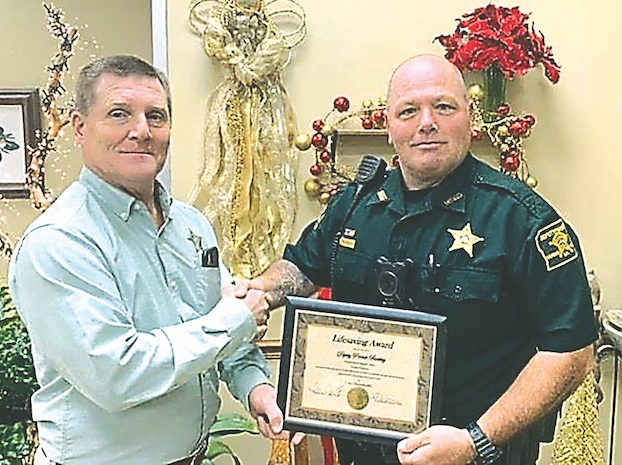 Deputy Patrick Buckley, right, assisted in saving a life for the third time this year last week when he located a missing senior citizen lost in a wooded area. Sheriff Sam Craft awarded Buckley earlier this year with a Lifesaving Award for his previous actions. (Special to the Leesville Leader)

A Vernon Parish deputy is being called a hero after his tireless work and dedication in locating a senior citizen who had become lost last week.

On Friday, the Vernon Parish Sheriff’s Office received a call that an 89-year-old cognitively impaired man had wandered away from his home in the Burr Ferry community. Family members told authorities they were even more concerned because the man had trouble speaking due to medical issues.

Deputy Patrick Buckley answered the call for help that day, and Sheriff Sam Craft said there was not a better man fit for the job.

“Deputy Buckley is always very conscientious in his work; he is incredibly thorough and he takes every call very personally. He was not going to leave that day until this gentleman was found and safe,” Craft said.

Buckley was the first officer to arrive on scene and he immediately set to work canvassing the area. The area where the man had last been seen was heavily wooded and thick with underbrush, but Buckley gave no hesitation before entering the area on foot himself.

As the deputy made his way through the area, he reported he could hear what he believed to be the man making noises from somewhere nearby.

Buckley followed the sounds and was able to successfully locate the man. He had been found about 300 yards from his home, and was sweaty, thirsty and had suffered cuts and scratches from his trek through the wooded area.

Buckley immediately rendered first aid to the man’s wounds and gave him water before transporting the gentleman back to his grateful family.

Buckley has been a deputy with the Vernon Parish Sheriff’s Office since November 2015, and Craft said this is the third time Buckley has been involved in a lifesaving event this year alone.

“Deputy Buckley is an incredible asset to the sheriff’s department. He is professional and takes every call seriously and personally. He always makes sure to pay attention to the details in every call he receives and this one was no different. He stayed the course and did not consider his job done until he knew this gentleman was safe at home and was medically alright,” Craft said.

When asked about his efforts on that day, Buckley brushed away the opportunity to speak about himself, humbly replying “I was just doing my job.”