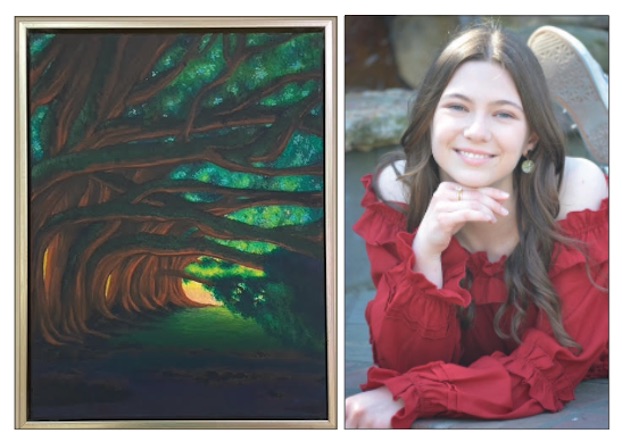 Artwork by a Vernon Parish student is now gracing the walls of Congressman Mike Johnson’s Leesville district office after she was recognized in this year’s Congressional Art Competition for the state’s 4th Congressional District.

High School senior Kiersten Lejeune placed fifth in the state’s 4th Congressional District portion of the nationwide visual art contest among high school students. Top winners in each district are selected by a panel of judges to have their work displayed in the U.S. Capital Building.

While Lejeune may not have won the top honors, she was the only student in Vernon or Beauregard parishes to be recognized in the competition and she placed fifth overall — an exciting feat for the student who had only just begun recognizing her passion and skill in the world of art.

“That painting was only the second painting I have ever done. It was really exciting to hear the news when my parents told me that it had been selected in the contest. I didn’t expect it at all,” Lejeune said.

Morgan Reese is Lejeune’s art teacher at Faith Training Christian Academy in Leesville, and she said she was immediately impressed by Lejeune’s abilities.

“She is a super talented girl and very talented with art. I’m not sure she even realized just how talented she is until she gave it a try,” Reese said.

Lejeune said she immediately took to the art form of drawing and painting, so much so that she has now added to her college plans so that she can get a secondary degree in graphic design.

“I’m planning on becoming a teacher, but I would love to write books and illustrate them some day. I would really enjoy doing that on the side and getting to spend more time creating art and enjoying it,” Lejeune stated.

As he announced the top winners of his district in the annual contest, Johnson praised the talent he saw from the students.

“We have so many talented students in our district, and seeing their artwork each year is something we all look forward to,” Johnson said.

The winning artwork that will hang in the U.S. Capital Building was created by Many student, Victoria Gaspard.