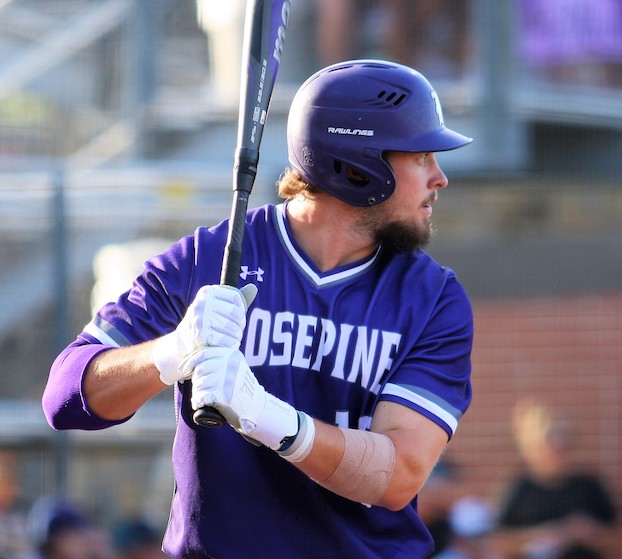 Rosepine senior Cole Donahue had a hit and two RBIs to help lead the Eagles to an 11-0 win over the Doyle Tigers in the Class 2A championship game last Friday in Sulphur. (Special to the Leesville Leader)

Senior Ethan Frey struck out eight batters and drove in four runs in leading the top-ranked Rosepine Eagles to an 11-0 triumph over the Cinderella No. 11 Doyle Tigers in the Class 2A finals Friday at McMurry Park in Sulphur.

With the victory, the Eagles end the season with a record of 34-2, winning their last 30 games consecutively.

“Most of these guys have played together since they were five and this was their moment,” Rosepine head coach Jeff Smith said. “They were laser-focused and they executed. We were locked in and that’s a testament to their determination.”

The Eagles wasted little time getting on the board, scoring twice in the bottom of the first. Jake Smith led off with a walk, took second base and then reached third on a bunt single by Logan Calcote.

Grant Ducote loaded the bases by drawing a walk, bringing Frey to the plate. Frey smacked a hard shot up the middle of the infield, which was mishandled by Jace Ware, allowing Calcote to round third and score following Smith crossing the plate, giving the Eagles a 2-0 lead.

The Tigers responded with a triple off the bat of Braden McLin to the deepest part of the park. However, McLin was stranded at third as Frey struck out two batters and induced a groundout to end the frame.

The Eagles scored four more times in the bottom of the third as Frey had a 3-run double, while Braden Trull doubled in courtesy runner Lane Willis, giving Rosepine a 6-0 cushion.

After working a quick fourth, the Eagles were able to tag five more runs to the total in the bottom of the fourth, which was started with an inside-the-park home run by Smith for a 7-0 lead.

Cole Donahue added a 2-run single in the frame, while Aden Cline drove in a run as Rosepine moved out to an 11-0 lead.

Frey and the Eagle defense did the rest in the top of the fifth as Frey forced a flyout, strikeout and a groundout to give Rosepine its second state championship in a row.

Frey, the title game Most Outstanding Player for a second year in a row, tossed a 1-hitter in his final game as an Eagle, while also driving in four runs.  Trull was the only Eagle with multiple hits as he was 2-for-3 with an RBI. Smith and Calcote each scored three runs in the win.

Coach Smith was extremely pleased with how his team performed, especially since they had struggled somewhat early on.

“Early on, I felt we put too much stress on ourselves. We felt we had to be perfect and we played tense,” Smith recalled. “But right before district, everything just seemed to fall into place. We started swinging the bat and found our rhythm.

“I’m just really proud of our guys,” Smith added. “They went out there with a goal in mind and they accomplished it. It was a heckuva ride.”