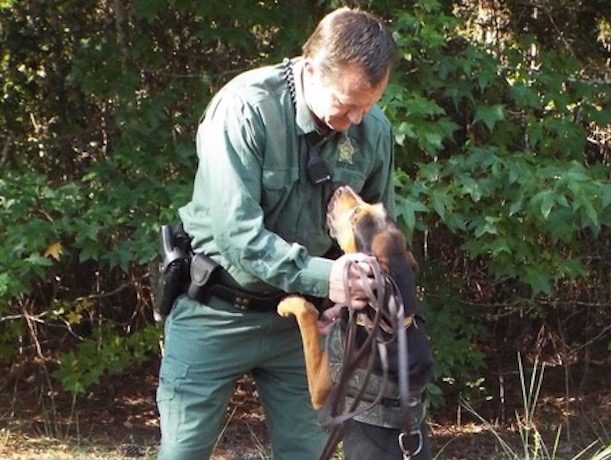 Deputy Ricky Stephens and K9 Duke have made more than 100 finds on the Vernon Parish Sheriff’s Office Chase Team. (Special to the Leesville Leader)

The Vernon Parish Sheriff’s Office is mourning the loss of one of its most recognized members today, with K9 Duke passing away Tuesday morning at the age of 11.

Duke had become a well-known name throughout the Southwest Louisiana and southeast Texas areas. With his handler, Deputy Ricky Stephens at his side, Duke had more than 101 finds under his collar and was called to assist with searches as far as Natchitoches and Sabine Parishes, and in Newton and Orange Counties in Texas.

Despite having retired from full-time work last year, Duke continued to answer the call when needed.

“Duke was a valuable asset to our VPSO team. Fugitive apprehension was only one part of Duke’s story. Many lost people including small children were tracked and rescued through Duke’s meticulous tracking abilities, and he was always up to whatever the task was,” Sheriff Sam Craft said.

Duke’s nose was the thing of legends even during his active career. His first documented find was at the age of nine months, while he was still considered technically a pup, and the oldest successful track that he trailed was six days old.

In an interview for a feature on Duke in January, it was clear Stephens held a high regard for his four-legged partner. On Monday, Stephens said that sentiment still rang true.

“He was a once-in-a-lifetime dog. I have had many dogs in this line of work and had many hunting dogs personally. I know it’s best not to get too attached to a dog, but this one got me. He was not just a partner, he was a great friend,” Stephens said.

Duke was born on March 28, 2011, and was brought into Stephens’ home as a puppy so that he could train with Duke during his free time, and that was where Duke stayed throughout his life and career.  Some of Duke’s favorite times, and Stephens’ favorite memories, involved his home life.

One video Stephens allowed VPSO to share on its social media pages on Tuesday shows Duke intensely focused as he makes his way through grassy fields with his nose to the ground, giving serious thought before making his decision to go left or right. At last, Duke rushes towards a tree where he finds Stephens’ young grandchildren as they dissolve into giggles.

Stephens said that was just one example of the many memories he will always hold dear.

“It wasn’t always about finding the bad guys with Duke. We had a lot of finds with happy endings, whether it was lost children or patients with Alzheimer’s. Those were the ones that really hit close to home for me because I am a parent and grandparent, and my father suffers from Alzheimer’s. I was even more happy to have Duke at my side for those,” Stephens said.

Stephens said Duke passed peacefully at home with his family.