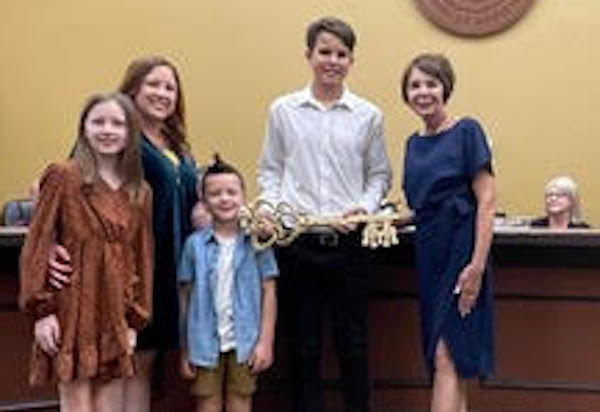 Alejandro De Dios (center) receives the key to the town of Rosepine from Mayor Donna Duvall (far right) with his host mother Sandy Barmore and her family. (Special to the Leesville Leader)

A foreign exchange student from Spain was presented with the key to the town of Rosepine this week by the City Council and Mayor Donna Duvall.

Alejandro De Dios said it was a very special moment to receive such an honor during the town’s regular council meeting Monday night. He said it was one of many enjoyable things he has experienced during his eight months living in Rosepine.

“It is a different culture here than in my home country, but I have met some very nice people here that have treated me good,” De Dios said.

De Rios has spent his time living with two host families, most recently living with Sandy Barmore and her family. During his time with the Barmore’s, De Dios said he has enjoyed participating in basketball games at Rosepine and going to football games. Most important to him though, was learning about the local government.

De Dios lives in the small village of Canalejas de Peñafiel, a community with a population of less than 250 people and one that his father serves as mayor of. During his visit, De Dios was excited to see how a small community in America serves its own people.

“I know that Rosepine has a population more than 1,000, so I know that things are different with it being larger than my village, but I learned that even though they are different in size they both operate similar. In both places, all the people must work together to accomplish things,” De Dios said.

Duvall said that in speaking with De Dios’ host family she learned of his interest in local government and was more than happy to provide him a special behind-the-scenes look in how the town operates. When she introduced him to town council members, she said everyone agreed there was something special about De Dios.

“Myself and everyone on the council really was so very impressed with him. He had a strong desire to learn more and see what lessons he could take back with him to his village. He is a great young man that I’m sure his family is very proud of,” Duvall said.

By presenting De Dios with a key to the city, Duvall said she hopes he feels welcome to return for another visit in the future.

De Dios said he is excited to return home to his father with the city key.

“I’ve told my family already about everything and they are really excited and said they are proud of me,” he said. “I only wish that I had a key or something similar that I could give in return to the mayor, but my village doesn’t have anything like that.”

As part of the exchange program, De Dios will return to his home in June.

“I’m excited because I miss my family, but I will miss the friends I have made here,” he said.