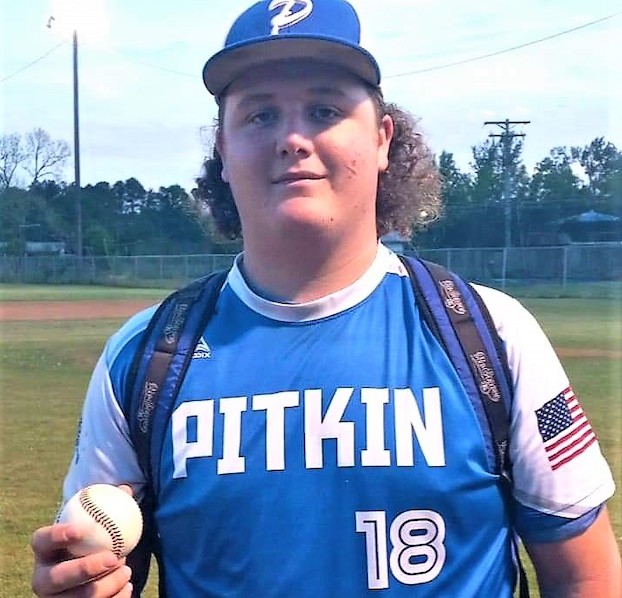 Brock Nolen connected on a two-run homer in the bottom of the sixth inning to help lead the Pitkin Tigers to a 9-1 win over the Anacoco Indians on Tuesday. (Special to the Leesville Leader)

PITKIN — The Pitkin Tigers took advantage of some uncharacteristic errors from Anacoco to secure a 9-1 win on Tuesday in District 5-B play.

The Indians made five errors, which led to seven unearned runs for the Tigers.

Pitkin took a 1-0 lead in the bottom of the second and added four more to the board in the third to open up a 5-0 advantage. The Tigers scored three more off of Anacoco starter Reid Rodriguez in the sixth inning, forcing the Indians to go to the bullpen.

Gauge Cole entered the game in relief of Rodriguez and surrendered a two-run homer off the bat of Brock Nolen for a 9-0 lead.

The Indians broke into the scoring column in the seventh inning when Dylan Fitzgerald doubled and later scored on a hit from Rodriguez to prevent the shutout.

Hunner Perkins earned the win for Pitkin on the mound, giving up one run on five hits with six strikeouts. Nolen finished 2-for-4 at the plate with a double, a homer and three RBIs.

Jaxon Perkins added a double and two RBIs, while Ivan Lockhart had a pair of hits and two RBIs.

Fitzgerald was 2-for-3 with a run scored, while Rodriguez doubled and drove in a run. Chase Taylor also had a double.