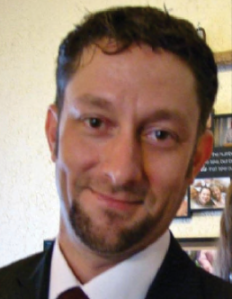 “I did it my way”
If love can be shared through a mischievous grin, that was Bradley Jay Bennett. Born in Leesville, La. to Ralph and Quinda Bennett, Brad moved to Bryan/College Station after high school, eventually meeting and marrying the love of his life, Lanice. Brad was an avid hunter and marksman, and he found solace in nature while fishing. He cherished his time with his friend John at the ranch, annual fishing trips to Toledo Bend with his brother Kevin and friends, laughing with his brother Brian, football games with his father-in-law, and his annual trip to Mexico’s beaches with his beloved wife. He often said that his most favorite spot in the world was curled up with Lanice on the couch with their dog snuggled between them. The Lord called Brad home at the young age of 42, but Brad will forever be remembered for his gentle love of animals, his teasing nature, and how much he loved his mom and family. Brad was Lanice’s absolute love, and she will dearly miss the life they shared, the laughs he invoked, and the strength he gave her.
Brad is proceeded in death by his father, Ralph Bennett; his grandfather John Evans; his grandmother, Ruby Youngblood; his uncle, Greg Evans; and his grandparents, Tiny and Aswell Bennett.
Brad is survived by his wife, Lanice Bennett; his mother, Quinda Bennett; his in-laws, Carolyn and Gene Chappell; his brother, Brian Bennett and wife Casey Bennett, daughter, Emily; his sister, Brandi Bennett, daughter, Bailee; and brother, Kevin Bennett wife Candy, two daughters, Brooke and Devon. Additionally, Brad is survived by his grandmother, Ruth Evans; grandfather, Henry Youngblood; aunt, Dowana Bates, her daughter, Christie Bates; as well as Mike Scofield; and his uncle, Steve Bates.
Brad was honored Monday, March 28, 2022, at the Wheelock United Methodist Church at 11 a.m. Visitation with family was held on Sunday, March 27, 2022, from 2 p.m. to 4 p.m. at the McCauley Funeral Home in Franklin, Texas. Flower arrangements can be sent through The Gift Shoppe in Hearne. In lieu of flowers, donations can be made to the Wheelock Cemetery Association, PO Box 184, Wheelock, TX 77882, in honor of Brad Bennett.