Trespassers’ fireworks may have been cause of church fire 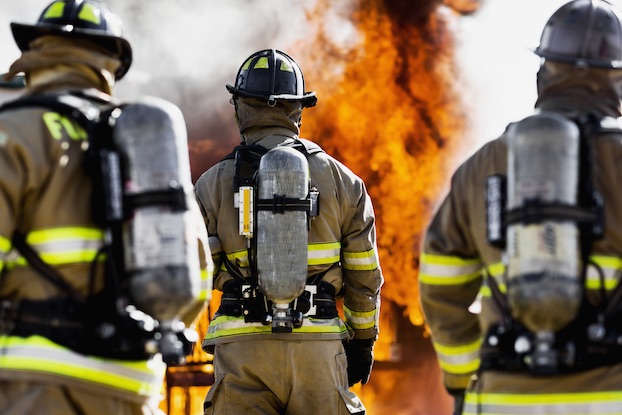 A fire that destroyed much of a Leesville church overnight on New Year’s Eve may have been started by trespassers shooting fireworks on the property, according to investigators with the state Fire Marshal’s Office.

Pastor Bobby Ganaway said he received an alert just after 1 a.m. that there appeared to be trespassers behind the Christian Living Fellowship church, located on U.S. 171 near Entrance Road.

“Our security team of volunteers received the news and went to patrol the property, but it looked like whomever it was had already gone by the time they arrived,” Ganaway said.

While the trespassers may have vacated the area, they failed to properly dispose of and extinguish the fireworks they had been setting off.

According to the Fire Marshal’s Office spokesperson Ashley Rodrigue, investigators believe the fire began near trash cans located near a shed behind the church.

“While the exact cause of the fire remains undetermined at this time, after gathering information about activity on the property in the hours prior to the fire call, and locating the remnants of fireworks in the area of origin, deputies cannot rule out the possibility of carelessly discarded fireworks as a potential contributing factor,” Rodrigue said.

Ganaway said he arrived as firefighters were battling the blaze, and believes their hard work may have saved the building’s sanctuary from being completely destroyed by the fire.

While the sanctuary may have been spared fire damage, Ganaway said the building suffered overwhelming water damage and is being assessed by insurance adjusters the future of the building.

“They have said it may need to be completely gutted. We are just waiting to see what the ultimate decision is,” he said.

Still, Ganaway said the church’s congregation refused to let the devastation keep them from worshipping. On Sunday morning, just hours after the blaze had been put out, the church community gathered to worship at the church’s landmark, a large cross still standing on the property from when the church was first built in 2018.

“The cross means a lot to people around here, it’s a symbol and it’s also something that the building itself has been known for because the cross is so large and visible in the area. It just seemed like the right thing to do, so I put a call out on social media that we would gather at the cross since we couldn’t have service in a building. We couldn’t let the devil win,” Ganaway said.

The call was answered, and not just by the church’s congregation. Several hundred people gathered that cold morning on New Year’s Day to worship and comfort the church’s members. Ganaway said they were joined by congregations from surrounding Leesville, and since that day they have received incredible support from those churches and from churches in DeRidder.

“We have been incredibly blessed by the outpouring of support from those churches, and they also offered us the use of their buildings for our worship services. It was just incredible,” he said.

As of this week, Christian Living Fellowship has been given the use of the Vernon Parish Fairgrounds for services for the foreseeable future until a new church building has been secured long-term for their worship services.

“We have had to downgrade our services from three services to one on Sundays, but we will do what is necessary. We just want to make sure that we continue to worship God and not let satan win. I think that is the most important thing on all of our hearts; we want to turn this into a positive moment and not let it bring us down. We’re just sticking our tongue out at the devil saying ‘you can’t stop us’,” Ganaway said.

As the blaze began on the first day of a new year, Ganaway said the irony has not been lost on himself or the church, but that they believe this could be the start of something exciting.

“It is scary, the unknown of it all, but it’s also exciting and we are embracing that. We believe that God is going to use this for something bigger, and we are ready for it. And we can’t thank this community enough for supporting us in our time of need,” he stated.