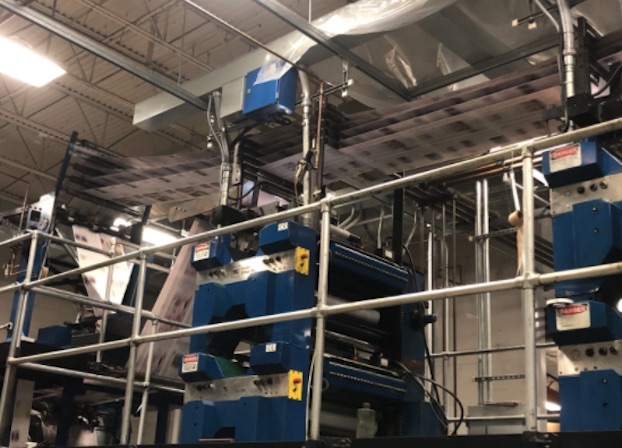 Papers make their way through the printing towers of the American Press. (Crystal Stevenson / Leesville Leader)

Two men have been arrested for attacking a longtime American Press carrier while he was delivering newspapers to the door of an elderly resident’s home in Rosepine.

Douglas Paul James, 32, of DeRidder and Dillon Matthew James, 24, of Rosepine were arrested on Wednesday and charged with one count each of second-degree battery.

According to Vernon Parish Sheriff Sam Craft, the arrests stem from an incident that occurred at about 3 am. Friday, Dec. 17, when officers with the Rosepine Police Department requested assistance from VPSO in relation to a battered person.

Craft said deputies traveled to Rosepine and met with the carrier who indicated he had been delivering newspapers in the area of Catfish Hut Road that morning. The man said he had walked up a driveway to place a newspaper on a porch when he was approached by at least two male subjects.

The carrier said the men confronted him and questioned him about what he was doing on the property, and then physically struck him.

The carrier said he was able to get to his vehicle and leave the location, and traveled to a business in Rosepine where he met with Rosepine police to report the incident.

The carrier was transported to a local hospital for treatment for his injuries.

Craft said detectives and deputies canvased locations on Catfish Hut Road and went to the residence where the incident was said to have occurred and were able to identify the two subjects involved in the incident.

Through their investigation, detectives determined the carrier had been delivering newspapers in the area for quite some time, and it was a habit for him to walk a newspaper to the porch of some customers who the victim knew to be elderly or suffering health issues.

Detectives learned that, unbeknownst to the victim, the elderly gentleman who lived at the residence where the attack occurred had previously had a prowler at his residence.

Craft said on that morning, two family members of the gentleman happened to pass by the driveway as the carrier was walking back to his vehicle.

Craft said the men approached the victim and the physical altercation took place because the two men falsely believed the carrier was the prowler.

Both men were booked into the Vernon Parish Jail with bond set at $5,000. As of Wednesday afternoon, both men had posted bond and were released.

The victim suffered serious injuries from the attack and has since undergone surgery at a hospital in Shreveport. Officials said that as of Wednesday he has been released from the hospital.