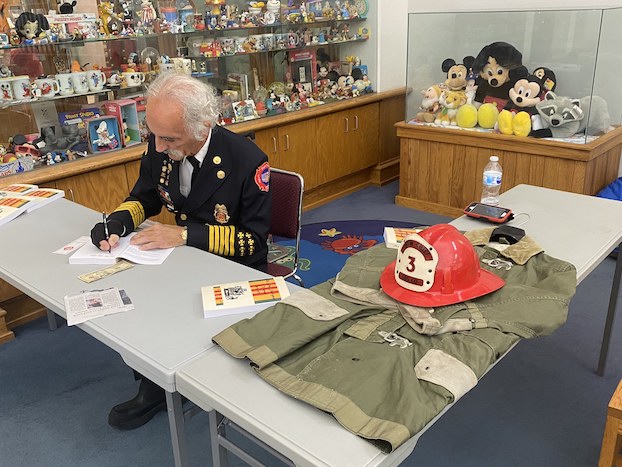 Author Michael Kuk has released his book: “An Army Firefighter in Vietnam, 1970-71.” He recently held a book signing at the Vernon Parish Public Library in Leesville, where he met with residents, signed books,and spoke about the experiences he had during the war.

Kuk is known by many for his years as fire chief for the Joint Readiness Training Center and U.S. Army Garrison at Fort Polk. Although he has had a lot of writing experience in magazines, trade publications and military documents, this is his first book.

The book spotlights his time as an Army fireman during the Vietnam War. The book not only tells about Kuk’s experiences, but also the experiences of what it meant to be a fireman in the military during that time.

“Some of these stories are going to be real eye-openers,” Kuk said.

He recalled a time when he was called to respond to a freighter that had caught fire: “Even though we did not have any shipboard firefighting expertise, we were called to help one of our freighters carrying supplies when it was on fire in the South China Sea, which was outside of the port of Saigon.”

The account of that rescue is just one of the many eye-opening stories featured in the book.

At 21, Kuk was in charge of 20 other men, and faced challenges many would not expect. When he and his fellow firefighters responded to a fire, they did so knowing that the enemy could be out there waiting for them. They had to be armed and ready for anything.

“We literally slept with our pistols,” Kuk said. “If we were fighting a fire and we had our fireman clothing on, that pistol was underneath it. We never knew when we were going to get attacked.”

According to Kuk, military firefighters in Vietnam helped out a lot of poor rural communities in the country that had no fire departments or similar emergency services. He noted the impact they had on these communities. Kuk recounted a story about an orphanage in a rural village in Vietnam, and the impact one nun made on him and his fellow firefighters.

“The Catholic nuns who ran the orphanage were very much aware that the military firefighters were their only saving grace,” he said. “These were small, rural areas that did not have fire departments or things like that, and they counted on us to come if they had a problem there. One of the nuns got upset one day because she found out that there were threats made against the firefighters.

“I don’t know how she did it, but she got a hold of the Viet Cong, and she explained to them that these are the people who are taking care of all the children. These are the same people here that are going to come if your village caught fire. [She said] ‘Don’t you dare hurt the firemen.’ ”

“Somehow or another, she put the fear of God in them. After that point in time, the Viet Cong never shot at us or harassed us in any way. When they saw our red trucks, they left us alone. That’s a blessing. I’m still here to talk about it.”

In addition to the compelling stories from Vietnam, the book contains rare photographs from that time. Kuk noted that many who have read the book have been really interested in the photo section, and have given him positive feedback on the photos as well as the stories.

“An Army Firefighter in Vietnam, 1970-71” is available at most major book retailers and online stores.