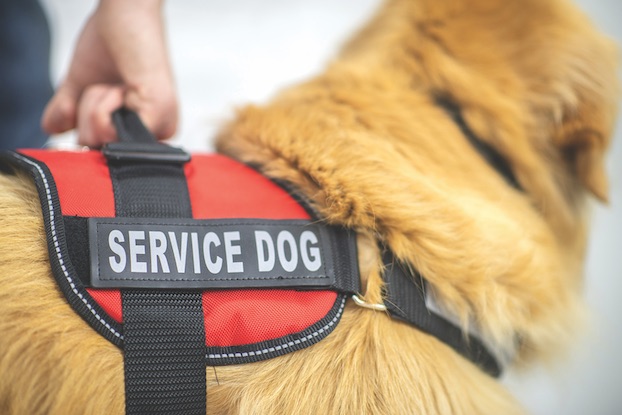 A Beauregard Parish Marine Corp veteran was bestowed an exceptional gift this month, as he was one of 16 veterans across the nation to receive the grant of a service dog at no cost to his family.

On Dec. 7, Merryville resident Cameron Morrow was honored in one of 11 events held simultaneously — both in person and online — from Delaware to California by the American Warrior Initiative, as organizers awarded 16 service dog grants to 16 veterans who had expressed a need to AWI. In addition, each veteran received a $5,000 grant to assist the veteran and their family in whatever way they needed.

Angela Dowden, a mortgage loan officer with Fairway Mortgage, which promotes AWI, was present for the local event held in Leesville and she said she had no idea how emotional it would be for everyone involved.

“I really don’t have words to describe this experience,” Dowden said.

“It blew my mind, truly, at all the selfless giving from Fairway and its employees, and then to witness the impact it made in the lives of these veterans. Just amazing to be able to see and be a part of.”

The American Warrior Initiative nonprofit was created in 2011 to help “bridge the gap” between civilians and military members.

It is the brainchild of Fairway’s Vernon Parish branch manager Louise Thaxton, who said she first set out to make a difference for veterans after working on her very first VA loan for an active duty military service member.

In 2005, Thaxton was living in Many with her family and helping operate their private farming business when Hurricane Rita struck. The family farm business was destroyed, and Thaxton said she found herself struggling to find a way to help support her family and pick up the pieces after the storm. She began working as a loan officer, but still struggled with “finding her place” in the environment.

She soon found herself writing her first ever VA loan for an active duty military member who was purchasing a home in the area. It was her first experience with the military community, but it would be far from her last.

“As I sat across from this soldier at the closing table and began having a conversation with them, I realized there are so many challenges these soldiers and their families face throughout their time serving. It’s more than most people, definitely myself, realized at that time and it was such an eye-opening moment for me,” Thaxton stated.

In that moment, Thaxton had found her mission and her purpose. She began specializing in VA loans, and she worked to educate other loan officers across the numerous states that Fairway Mortgage operated in how to better assist veterans.

That passion then birthed the American Warrior Initiative. Funded through payroll deductions from the 11,000 employees across the U.S., the nonprofit organization seeks to fill the needs of veterans outside of the mortgage office. Shortly after its inception, Fairway’s CEO, Steve Jacobsen, took notice and has since offered his own support to the mission.

“Our motto has become ‘find the need, fill the need’, and with the support that we have from not only other employees but also our leadership, we have been able to do some amazing things for veterans,” Thaxton stated.

Over the years, the organization has helped to replace roofs, offer financial aid for medical expenses, and assist with family needs for veterans across the nation. But it was one veteran in particular in 2019 that would add fuel to the AWI fire.

In 2019, Thaxton met veteran David Proctor. With a history of extensive tours of duty in the Middle East, Proctor was facing severe PTSD that made ordinary life difficult. He had not left his home in three years, and AWI made the decision to provide Proctor with a service dog.

“That changed so much; for us and for David. He has since told us that this dog saved his life, and that opened up a whole new level of assistance that we knew we needed to provide,” Thaxton stated.

Through a partnership with Custom K9s, AWI has been able to match veterans with service dogs that will be trained to provide assistance for their specific needs. The response was amazing, Thaxton said, and for 2021 she set herself a goal of providing 100 service dogs to 100 veterans, and she said she intends to surpass that goal by Dec. 31.

Last week’s event brought that goal within reach, but it also marked another special honor for the organization. Of the 16 dogs that were granted to service members through Custom K9s, Thaxton said 13 of those dogs were in honor of the 13 soldiers killed in Afghanistan in August.

That honor was especially humbling to Morrow, who pledged to name his service dog Rylee, in honor of Lance Cpl. Rylee McCollum, who was killed.

The event marked a new beginning for Morrow and his family, and for Thaxton it gave her a moment of reflection thinking back to that very first closing a decade ago.

“I can remember thinking that my world was over when we lost our farming business, and now I see how God can do some amazing things when we let him. What I thought was the worst thing ever to happen to me was actually a blessing that has given me a purpose and a reason. I’m thankful every day for what I’m able to do to help the men and women who sacrifice so much to serve our country.”

Vernon voters back McMahon for constable