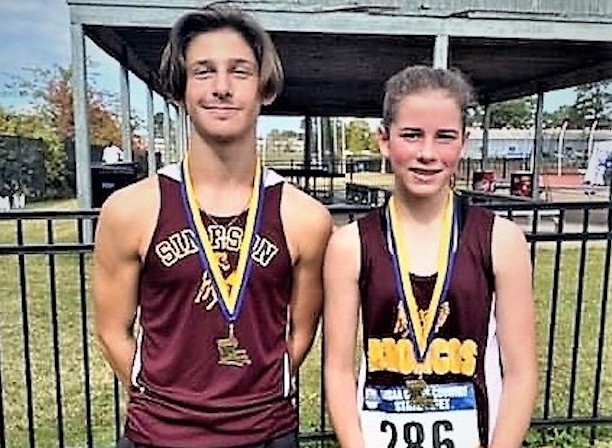 Allain was simply magnificent for the Broncos on Monday morning as he covered the 5-kilometer course in a time of 17:42.7, nearly one minute better than silver medalist Treyen Johnson of Plainview.

Simpson landed two other runners in the top 20 as Alan Ladner finished in 11th place with a mark of 19:58.2, while Aden Martin was 15th in a time of 20:22.0 flat. Chase Taylor (24th) and Braxton Basco (25th) rounded out the Simpson scoring, giving them a total of 76 points to claim the state runner-up trophy as Hackberry won the team standings with 68 points. Hornbeck was fourth overall with a total of 102 points, with Jaren Mitcham (5th) and Parker Alexander (8th) earning all-state recognition.

Trace Fox took 13th overall for the Hornets, while Bryan Remedies (38th) and JoJo Weeks (40th), rounded out the scoring. Brandon Parks (47th) and Beau Austin (55th) were the top runners for the Evans Eagles.

In Class B, the Anacoco Lady Indians took fifth in the team standings with 129 points as Sophia Acevedo-Swinney was an all-stater as she finished in fourth place with a time of 20:41.0. Bella Henry was 23rd overall, while teammates Skye Buentello (29th), Victoria Rangel (33rd) and Amani Buentello (52nd) rounded out the scoring.

As for the Indians, the top finisher was Maison Weaver in 30th place as Anacoco didn’t send enough for a team.

In Class 2A, the Rosepine Lady Eagles were sixth in the team standings, while the Pickering Lady Red Devils were 16th overall.

On the boys’ side, the Rosepine Eagles were 11th in the team rankings.

The top Vernon Parish finisher in the Class 2A race was Rosepine’s Sophia Jeffers, who was 11th overall. Teammate Lexa Thompson was 26th, while teammates Aubrey Holt (46th), Alicia Kitchens (52nd) and Hannah Henkel (56th) rounded out the scoring.

For Pickering, the top finisher was Harlie Ramey in 98th place. Teammate Laila Cooper finished in 108th place. The Eagles were led by Sullivan Hanna in 33rd place, while Pickering freshman Aiden Winstead was 55th overall.

In Class 4A, Leesville standout Lina Mills-Zacapa won all-state honors as she took fifth overall, leading the Lady Cats to seventh in the team standings. Natalie Smith was 27th overall for Leesville, while Ruby Gross was 53rd in the race. On the boys’ side, the Leesville Wampus Cats were seventh in the team standings as well, led by Kyle Lynn, who finished the race in 22nd place. Marlon Trejo was 33rd for the Cats, while freshman Taj Jackson was 52nd overall.