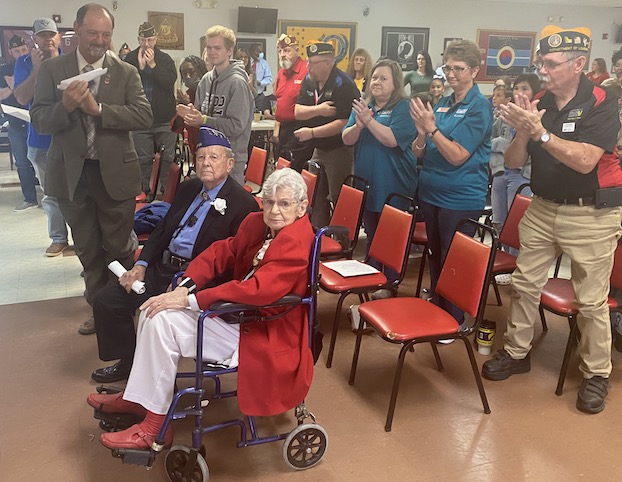 The rainy weather could not stop the Leesville community from honoring its veterans on Veterans Day. Many gathered at VFW Post 3106 to attend a special program to celebrate the men and women who dedicated their lives to serving their country.

With clear eyes and full hearts, everyone in attendance sang the National Anthem together to get the event officially underway.

Speakers honored the history of Veterans Day, and made sure to advocate for them to receive the care and respect that they deserve.

Two very special veterans were recognized during the ceremony. Retired Lt. Phyllis Carper, 96, and Retired 1st. Sgt. Sam Fulton Sr., 90. Carper served as a nurse during the entire scope of the Korean War. Fulton was the youngest 1st Sgt. in the history of Fort Polk. He served in both Korea and Vietnam in a career that spanned two decades. The duo received a standing ovation from the crowd as every person in attendance poured their gratitude upon the two veterans.

There were many at the program who spoke and discussed the importance of honoring veterans year after year. State Rep. Chuck Owen was the special guest speaker at the event. A veteran of the Air Force, Owen spoke about what Veterans Day means to him personally.

Owen spoke about the history of the U.S. military dating back to the era of the founding fathers. He praised the military veterans of the past who have stood at the ready to defend the freedom in which America was founded.

“We always believed the essence of this country was people having liberty, and being able to choose their own lives,” Owen said.

Owen said that Veterans Day is a time of reflection and gratitude. He emphasized that Americans were all on one team, and that people should be thankful for all who serve.

“On this day let’s all reflect on what it means to be on this team. This team of Americans,” Owen said.

To add to this year’s festivities, a major unveiling took place right after the conclusion of the program. The Female Veteran Monument was unveiled at Veterans Plaza. The monument is located in Veterans Plaza in Leesville The monument was a culmination of three years of hard work to make it a reality, especially during the pandemic.

Command Sgt. Major Kimberly Long was the special guest speaker in honor of the unveiling of the new Female Veterans Monument. Long gave a speech detailing the history and impact of female veterans throughout American history.  She marveled at the strength and fortitude of the early female veterans.

“These women were a tough breed,” Long said. “I was amazed when I was doing my research to find that so many lived to be over 100 years old.”

Her speech documented remarkable female veterans that saved lives and made an undeniable impact. Toward the end of her speech Long noted that it was the female veterans of the past that paved the way for women like herself to have a future in the military.

The crowd then moved to the site of the Female Veterans Monument as it was proudly unveiled by female veterans. The unveiling was the ultimate cap on a day of reverence and gratitude towards the veterans who have spent generations serving the United States of America.