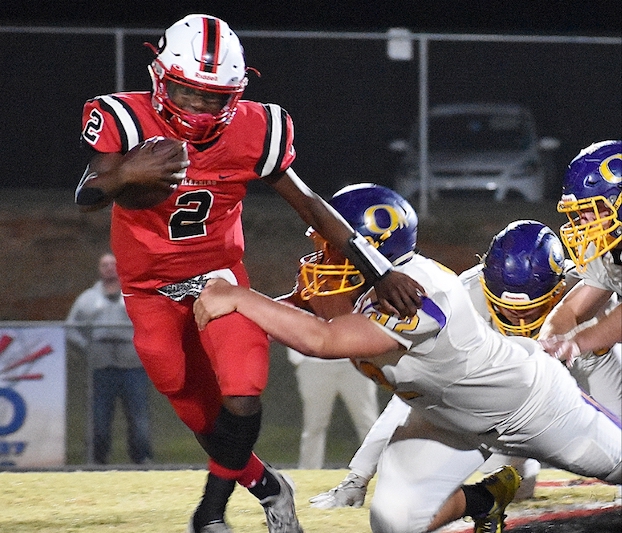 Pickering’s A.J. Berry (2) rushed for 60 yards as the Red Devils fell to Oakdale on Friday, 47-12. (Special to the Leesville Leader)

PICKERING — It was a tough way for the season to end.

The Warriors (6-4, 3-2) will see their season continue in the first round of the Class 2A playoffs next week with an opponent that will be announced by the LHSAA on Monday.

Oakdale ran the ball with great effectiveness, rushing for 435 yards as Jamall Warnell, Cedric Allison and Derrick Green each rushed for at least one touchdown and eclipsed the century mark.

Warnell ran for 222 yards on 14 carries and a touchdown, while Allison had eight carries for 107 yards and two scores as Oakdale owned a 28-6 lead at the intermission.

Dallas Daniels added a pair of rushing TDs and Green ran the ball six times for 103 yards and a score as the Warriors got the win.

A.J. Berry ran for 60 yards to lead the Red Devils, while Marlon Freeney had 39 yards rushing and two scores, along with 27 passing yards.

CAMPTI — London Williams rushed for four TDs and Joseph Yount tossed his first varsity TD pass as the Many Tigers routed the Lakeview Gators on Friday, 50-0.

Many (9-1) should be the top seed in the Class 2A playoffs when the pairings are announced on Monday at noon.

The Tigers got a 90-yard interception return for a touchdown from Malik Garner, while Ja’Marlyn Garner added a 35-yard TD run in the third period for a 43-0 lead.In the fourth, Yount fires a 35-yard TD pass to Sean Mitcham to account for the final scoring.