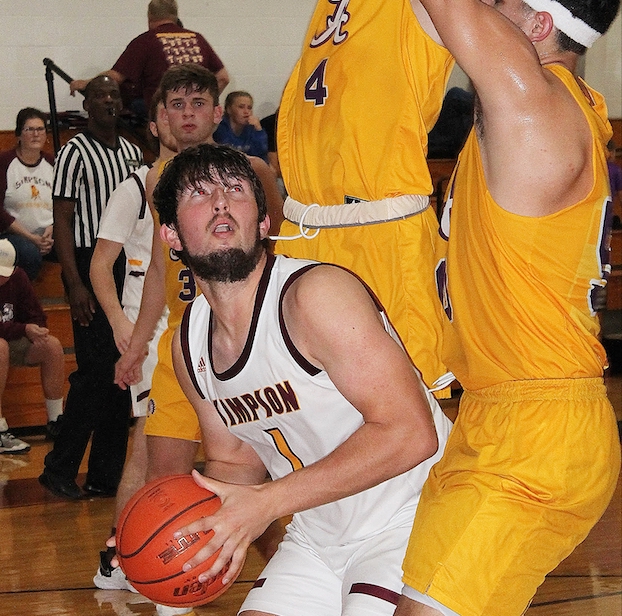 Simpson senior Ethan Nash (with ball) looks to score, while the Anacoco duo of Dustin Welch (4) and Emanuel Luzardo attempt to stop him. Welch and Luzardo guided the Indians to a 40-26 over Nash and the Broncos in the finals of the Simpson Tournament on Saturday. (Daniel Green / BWS Sports)

SIMPSON — “A thing of beauty is a joy forever,” once wrote John Keats.

Although it wasn’t a sight to behold, the victory on the scoreboard was certainly beautiful for the Anacoco Indians as they defeated the homestanding Simpson Broncos on Saturday night in the Simpson Tournament finals, 40-26.

With the victory, the Indians closed out a perfect week with a mark of 5-0, while the Broncos fell to 3-1 overall.

Neither team was really able to get the offensive motor in gear during the first half. The opening quarter saw only eight combined points from the two teams, with Anacoco entertaining a slight advantage, 5-3.

It didn’t get much better in the second period in the offensive category for either squad. Simpson senior Braxton Basco scored all seven of the Broncos’ points in the frame, while Anacoco managed nine points to claim a 14-10 lead going into the halftime break.

Both teams picked it up offensively during the third quarter as Dustin Welch and Brayden Prichard each scored five points for Anacoco, while Ethan Nash added seven for the Broncos. But by the end of the frame, the Indians had worked its way out to a 26-22 lead.

Anacoco began to pull away in earnest during the fourth the Indians scored 14 of the frame’s 18 points to seal the win.

Emanuel Luzardo led Anacoco with 12 points, while Welch pitched in with 11 points.

Simpson got 10 points from Basco, while Nash added nine points in the loss.