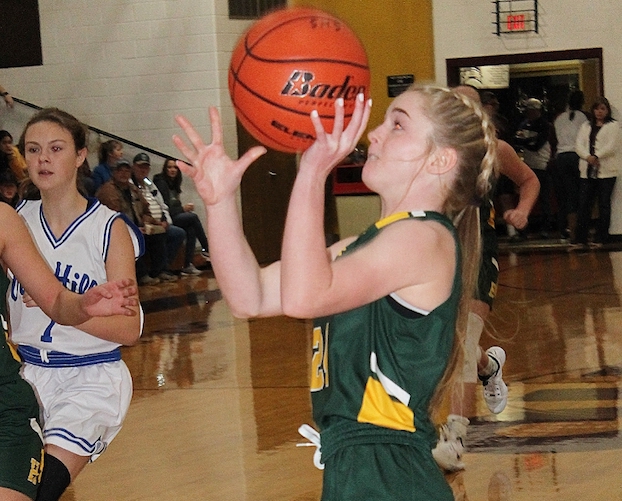 Hicks guard Reese Stephens goes up for the short jumper early in the first half of the Lady Pirates’ win Saturday over the Oak Hill Lady Rams in the finals of the Simpson Tournament, 49-46. (Daniel Green / BWS Sports)

Despite a valiant effort from the Oak Hill Lady Rams, Hicks post player Shyanne Phillips converted a three-point play with seven second to go to lift the Lady Pirates to a 49-46 win in the finals of the Simpson Tournament on Saturday.

With the victory, Hicks finished the opening week with a record of 4-0. Oak Hill dropped to 3-1 overall.

The Lady Rams jumped out to a 14-5 lead early in the first period behind six points from Krystina Greene, but Hicks closed on a 5-0 run to get to within 14-10 after the first eight minutes of play.

The Lady Pirates chipped away at the Oak Hill lead during the second period, but the Lady Rams held the advantage going into the intermission, 19-18.

But Hicks came to life and took a five-point lead about midway through the third, only to see Natalie Boone bury a couple of three-pointers to tie the game up heading into the final frame, 36-36.

The game went back and forth during the fourth, with neither team gaining a clear advantage. But with the game knotted at 46-46, Hicks got the big three-point play from Phillips to take the lead, 49-46, with just seven seconds remaining.

Oak Hill’s last shot opportunity was blocked at the buzzer, allowing Hicks to escape with the victory.

Phillips led the way for Hicks with a game-high 21 points, while Lauren Quinn added 12 points.

Rosepine rallies for 27-9 win over DeQuincy