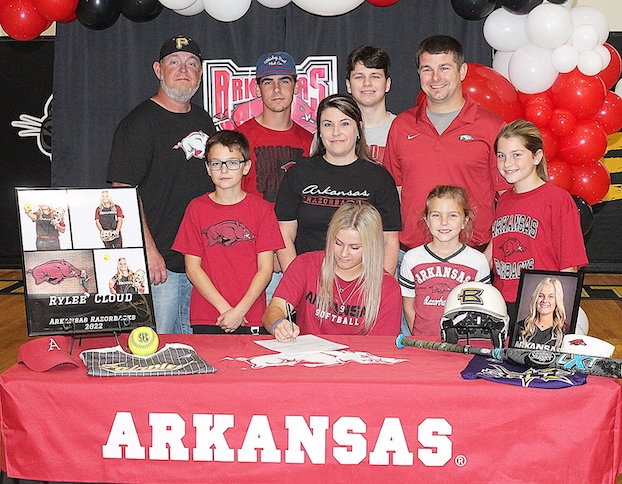 GRANT — Fairview has had its fair share of solid athletes walk the halls of the Allen Parish school.

But perhaps none were the caliber of senior Rylee Cloud.

“I’ve been here for 22 years and she’s the best I’ve ever coached,” said Fairview softball coach Cody Williams. “Rylee is elite, a cut above and just very, very talented.”

Cloud, a standout shortstop for the Lady Panthers signed her national letter-of-intent Wednesday evening with the University of Arkansas I’m front of a big crowd of family, friends and teammates.

“This is a big deal,” Fairview Lady Panther head basketball coach and athletic director Kyle Jinks said. “ Rylee is our first athlete to sign with the Southeastern Conference.”

Described by Williams as a 5-tool player, Cloud chose Arkansas over LSU, where she plans to major in marketing, while also taking her cuts on the softball diamond.

“You don’t get too many players like her everyday,” Williams said. “Not only is she a cut above as a player, she also has a different type of work ethic. She’s just special.”

Williams saw those qualities in Cloud as an eighth-grader. Cloud stole 73 bases in 22 games, including a straight steal from first to third. Cloud also blasted a 3-run homer in the top of the seventh in a quarterfinal win over Florien, ending the Lady Blackcats dominance in Class B.

After being named first-team all-state as an eighth-grader, Cloud missed her freshman season with a torn ACL and her sophomore year was wiped out due to COVID-19.

In the meantime, Cloud still managed to get major exposure due to travel ball tournaments. In fact, it was a tournament in Alabama where she was first noticed by Arkansas. And once she visited the campus, she was admittedly smitten.

“I just fell in love with Arkansas,” she said. “I wanted to go somewhere where I felt comfortable and I just loved the atmosphere. From the first time I visited in 2018, it just felt right.”

Cloud isn’t just a softball standout for Fairview, having been a two-time first-team all-state, but she also excels on the hardwood, having been a part of three Class B titles for the Lady Panthers. She is also a two-time all-state selection in basketball.

Cloud is happy the recruiting process is over and is now focused on getting her basketball team back to the state championship game, while also leading the softball team to new heights.

“I really think if we put in the work, we have a shot at playing in Sulphur next spring,” Cloud said. “ But right now, I want to make a run at state in basketball.”

Cloud, who sports a 3.7 grade-point average, is the daughter of Kamie and Devin Cloud.